Are You a Woman at Least 5’10” Jealous of Taller Women? 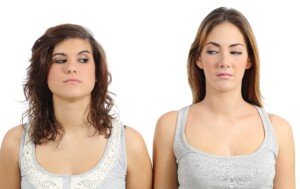 There’s nothing wrong with being a very tall woman (at least 5-10) who’s envious of even taller women — even if you don’t play basketball or volleyball.

Yes, sometimes, a very tall woman would love to be even taller, even though it may have nothing to do with blocking shots in volleyball or basketball.

A man I know said his 5-11 wife is envious of taller women in the same room.

And I’m jealous — not in a hostile way but in an envious way. But it’s not that unusual for a 5-8 woman to wish to be taller.

What about women 5-11 or 6-1 who don’t like their position of tallest in the room to be robbed by an even taller women? It can happen more often than you think.

Today at the gym, for some mysterious reason, there was a slew of women at least 5-9 or 5-10. I just couldn’t believe how many tall women were in the building at the same time.

They all seemed to be between 5-9 and six feet. Had a 6-3 woman popped into the gym, I’m betting that a few of those 5-tenners or even six footers might have envied her.

But natural height can’t be mimicked. Tall women who wear high heels would probably like to have a few more natural inches so that they’d be as tall in athletic shoes or more comfortable flat shoes as they are in high heels.

When I was a kid, the teacher often had us line up according to height. Kids fought over who was taller and tried to stand at the tall end of the line, even though they were a little shorter than a few kids before them in the line.

The teacher would make the one particular kid get in the correct position, and that kid was never happy about that, always with a sour pouty face.

I never saw this jockeying for position occur at the short end of the line. No kids ever bickered who was shorter. I never heard, “I’M shorter!” or, “I’M shorter than you, na-na-na-naaaahh-nahhhhhh!”