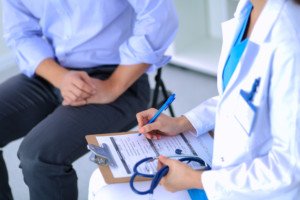 You’re scared that prostate cancer—which you don’t know if you have—will spread by a needle biopsy.

But if you don’t have the needle biopsy, then you can’t be diagnosed with prostate cancer – and thus won’t get treatment for it.

So if you refuse the needle biopsy out of fear that it will spread your undiagnosed prostate cancer, the cancer will spread ANYWAYS because it won’t get treated!

Unfortunately, we don’t yet have Star Trek technology in which a doctor can hover a handheld instrument near your private area, and its screen lights up with “prostate cancer detected.”

Maybe one day there will be an app for that, with 100 percent accuracy. But until then…we need to go with the standard of medical care.

But CAN a needle biopsy spread prostate cancer?

“There is no real evidence that prostate biopsies cause prostate cancer to spread,” says Michael Herman, MD, director of urologic oncology at South Nassau Communities Hospital in Oceanside, NY.

“There are nearly one million prostate biopsies in the U.S. alone. If biopsies really worsened prostate cancer, we would have seen more evidence of that by now.

“Also, the only way to know for sure whether or not someone has prostate cancer (as with any other cancer) is to perform a biopsy. So this should not be a concern for patients. ”

Suspicion or likelihood of prostate cancer is not the same as a diagnosis. Sometimes a suspicion is there and it turns out the patient is healthy.

In these cases, the needle biopsy can’t spread anything.

But what IF…just what if…you DO have a malignant tumor in there, and you forego the biopsy?

No treatment = dangerous spread for aggressive forms of the disease.

Dr. Herman continues, “The biggest risk of a prostate biopsy is the risk of infection. Patients should always understand why they are undergoing a biopsy.

“They should ask their physician why they have been recommended to have a biopsy, and what are their risks of having prostate cancer.

“That way, they can decide for themselves whether the risks of a prostate biopsy are worth it.”

Dr. Herman’s interests include reducing the over-diagnosis and over-treatment of prostate cancer by utilizing the latest biomarkers and imaging techniques. He is at the forefront of treatment and research of urologic cancers.