How to Minimize Pain During Core Needle Biopsy for Breast Cancer 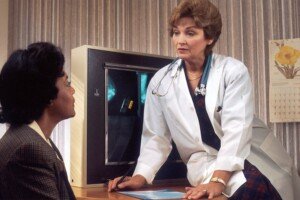 There are multiple key factors that influence the amount of pain during a core needle biopsy when breast cancer is suspected.

“The level of pain that one experiences during a core needle biopsy depends upon the anatomy and architecture of your breast and where the area in question is located,” says Karen Patrusky, a board certified OBGYN and F.A.C.O.G. in private practice for 20+ years.

• Biopsy depth. “This is related to how deep the needle needs to penetrate the tissue and how dense that tissue is,” says Dr. Petrusky.

• Human factors of the operator. “Another important factor is making sure the person performing the procedure has experience so that it can be done swiftly and accurately.”

• Duration of the core needle biopsy

In a study, 150 women underwent a core needle biopsy consisting of three to nine 14-gauge breast passes taken while the women lied face down on a specialized table.

None of the women had palpable lumps; rather, suspicious lesions had been detected on mammograms.

After the procedure the women filled out a questionnaire.

• The lying position on the table

Factors that DO Cause Pain During Core Needle Biopsy 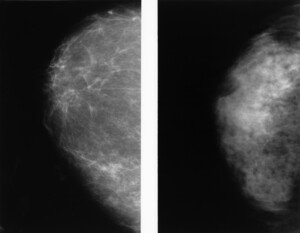 The breast on the right shows denser tissue. Cancer.gov

Next, depth of the biopsy correlated to pain. Not surprisingly, deep insertions hurt more than more shallow ones.

Also not surprisingly, number of passes was a factor — to pain felt in the neck and shoulder.

Finally, duration of lying on the table (though the actual position itself wasn’t uncomfortable — be sure you understand that distinction) correlated to neck pain.

All of the patients in this study stated that they’d undergo a core needle biopsy again if recommended. Sixty percent said it was not painful.

What can be done to keep pain minimized during a core needle biopsy?

Next, make sure that you are set up as comfortably as possible on the table.

But remember, the longer the procedure, the more likely you’ll experience a neck ache.

If the patient likes their operator’s “bedside manner,” this will have a psychological effect on minimizing pain.

See if you can chat with your operator before the procedure is scheduled.

The more experienced the biopsy team is, the shorter the procedure will be – which means a higher likelihood of less pain. You’ll want a radiographer with a lot of experience.

As you can see, there are factors (such as breast density and depth of needle) that a patient cannot control, that correlate to pain during a core needle biopsy.

However, when all factors are considered, there’s much that she CAN control – including mindset once she learns as much as possible about this safe and reliable procedure ahead of time. The full report appears in European Radiology. 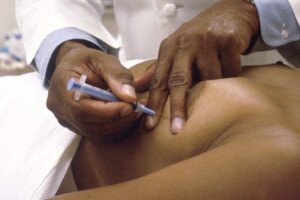 “A fine needle biopsy is the term typically used to describe the procedure done to aspirate a cyst, a fluid filled mass,” says Dr. Petrusky.

“This procedure is commonly performed to diagnose and remedy a cyst.

“This procedure is usually reserved for lumps that are palpable, or able to be felt on exam, and fluid filled .

“This procedure can offer a quick way to offer a diagnosis when a breast mass is felt on clinical exam.

“A core biopsy is a procedure where a tissue sample is obtained from either a palpable mass or a subclinical mass, not felt — but seen on a radiographic study such as a mammogram, which can then be microscopically examined and determined if it is benign or cancerous by a pathologist.

“The needle used for the core biopsy has a greater width than the fine needle aspiration.

“Sometimes after a core biopsy a marker is placed. This is a small clip, the size of a sesame seed, that is placed in case a wider excision or lumpectomy is necessary.

“This marker will document the location of the area in question and confirm its removal.”

A core needle biopsy is more likely to collect an adequate tissue sample and yield a definitive diagnosis.