Can Melanoma Be Misdiagnosed As a Skin Tag? 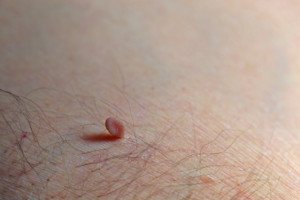 If you think you have a skin tag, it’s possible it’s a melanoma, and it’s also possible for a doctor to misdiagnose a melanoma as a benign skin tag.

Melanoma is a ruthless form of skin cancer that’s quite adept at masquerading as benign and harmless skin lesions, spots and bumps.

This disease takes on many visible forms, even though the media usually portrays it as the “ugly duckling” or “scary black” mole.

Yes, a superficial spreading melanoma is most likely to be described as the “odd looking mole” or the mole that “looks different from all the rest.”

But there is another type of this cancerous skin tumor that’s anything but flat.

This Type of Melanoma Can Sometimes Pass As a Skin Tag

“Some melanomas, also known as pedunculated melanomas, while rare, can be misdiagnosed as skin tags,” says Vishal Madan, MD, consultant dermatologist, laser and skin cancer surgeon, and founder/director of Everything Skin Clinic™.

“A high index if suspicion will allow the dermatologist to diagnose these,” continues Dr. Madan. “This is a very rare lesion.”

“Quantification is not possible. However, it is highly unlikely that a skin-colored skin tag with no other warning signs such as pigmentation, bleeding, rapid growth can be a melanoma.

“If the patient has multiple skin tags that look identical, the lesion is likely to be a skin tag rather than a melanoma.”

Usually, a pedunculated melanoma has a dark color – in the range of maroon, purple, brown and blackish. But it can also be a deep red. 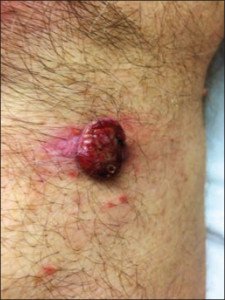 As for bleeding, keep in mind that a harmless skin tag may bleed if irritated by the friction of clothing rubbing along it.

It can also bleed if it’s scratched. These benign growths do have a blood supply, so it should be no surprise that scratching it, even if there’s a layer of clothing between the fingernail and the growth, can cause it to bleed. After all, it’s made of skin, not bone.

A person may not know that what he’s scratching is a protruding growth, and may end up scratching vigorously due to what’s perceived as just another annoying itch.

Nevertheless, if you have a skin tag removed (which should always be done by a dermatologist), request that it gets biopsied.