What is Central Regression in a Melanoma? 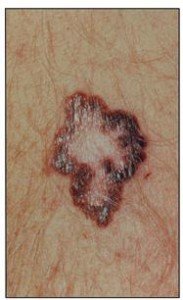 A doctor may describe a melanoma as having “central regression” or as being “centrally regressed.”

Though this term seemingly is self-explanatory, it does warrant further explanation to the layperson.

“A formation of a scar-like area, which represents immune-mediated removal of pigment cells in a melanoma, is called regression,” says Vishal Madan, MD, consultant dermatologist, laser and skin cancer surgeon, and founder/director of Everything Skin Clinic™.

In other words, the immune system at some point detects the cancer and begins destroying it.

This may sound like great news, but there’s a big problem with regressed melanoma.

The immune system may eradicate the malignant spot before the patient has a chance to notice it and bring it to a doctor’s attention.

The “mole” may have been killed off by the immune system, but not before it had a chance to burrow into the deeper layers of skin and migrate via the lymphatic system to a distant site of the body!

There are cases of melanoma being diagnosed inside the lungs, liver or brain – metastatic tumors – but the primary site on the skin is never found.

In these cases it’s believed that the primary site had already undergone complete regression, escaping notice by the patient (and doctor during a routine clinical skin exam).

Even when the lesion is noticed before the regression makes it visibly disappear off the skin, “This can affect the prognosis of melanoma — as pathologists would consider the depth of melanoma to be deeper if regression is seen,” says Dr. Madan. 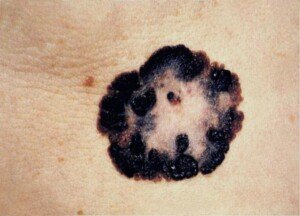 What makes the immune system get involved in the first place?

“Because the melanoma is identified by the immune cells to be abnormal,” says Dr. Madan.

Unfortunately, this detection does not occur with every single melanoma, let alone in its earliest stage.

Researchers do not know why some of these tumors get attacked by the immune system while others evade it.

The center of the melanoma gets attacked first.

Dr. Madan says, “This is usually where the burden of abnormal cells is the highest.”

Prognosis at the Time a Melanoma with Central Regression Is Found

Dr. Madan explains, “This depends upon the depths of regression and overlying melanoma measured together.”

There is no cookie-cutter answer to: What stage is a centrally regressed melanoma at when it’s discovered?

Dr. Madan says that the stage is “very variable, can range from 1b to 4.”

Thus, if you’re diagnosed with a melanoma with central regression, chances will be pretty high that it will not be an early catch, as in stage 0 (in situ) or stage 1a.

However, centrally regressed melanoma in situ is possible.

And of course, stage 4 is bodywide metastasis and has a very poor prognosis.

Checking Your Skin for a Melanoma with Central Regression

It’s important to note that a benign mole that has a hair follicle in it can pass as a centrally regressed melanoma to the layperson’s naked eye.

A benign mole can also have central regression.

• Examine your skin every month for suspicious moles or changes in moles such as in their borders and symmetry.

• When in doubt, see a dermatologist!

• If any mole or spot is ever removed, request a biopsy, even if the removal is for cosmetic purposes.