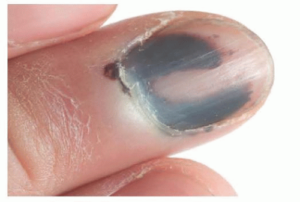 Further complicating this issue is that benign pigment in a nail can mimic a true Hutchinson’s sign.

Melanoma of a fingernail or toenail is also called subungual. For reasons unknown, it is more common in blacks than in whites.

But it can’t be said enough: Being white does not prevent development of this disease.

It’s when the melanoma cells grow or spread beyond the nail plate, causing dark pigmentation to the skin that surrounds the nail plate. This includes near the cuticle.

When the spread occurs to skin near the top or sides of the nail, it may appear as a brown stain. 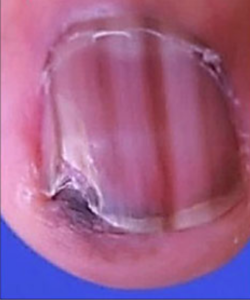 Does every case of subungual melanoma have a Hutchinson’s sign?

“No, not all nail melanomas have Hutchinson’s sign on presentation,” says Vishal Madan, MD, consultant dermatologist, laser and skin cancer surgeon, and founder/director of Everything Skin Clinic™.

Dr. Madan explains, “It’s a late manifestation, and many melanomas can be diagnosed earlier before they develop full-blown Hutchinson’s sign.”

So if you’re diagnosed with subungual melanoma that shows this ominous sign – which is named after Sir Jonathan Hutchinson, an English surgeon and pathologist (1828-1913) – the prognosis won’t be too good.

What appears to be a Hutchinson’s sign is not a 100 percent indicator of melanoma. A dermatologist needs to carefully inspect the area.

Benign pigment that extends under the cuticle can mimic a malignant spread.