Are You Autistic and Fascinated by Drone Science? 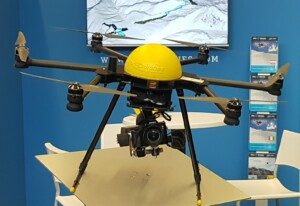 An autistic drone scientist helps autistic people get jobs in the drone industry, which is growing by the minute.

“Neurodiversity is a superpower and a competitive advantage,” says Jason San Souci, who was diagnosed on the autism spectrum at 42.

He’s the co-founder of Neurodiversity Works, which helps eager autistic adults find jobs in the growing drone industry by pairing them up with mentors who are experts in this exciting industry.

Autistic people think and see the world differently. This is a tremendous advantage in the drone industry.

Neurodiversity Works develops targeted technical training programs, and fosters relationships between students and their mentors. It works with employers to advocate for neurodiverse hiring programs.

A Mission You Need to Know About

It’s high time that neurodiversity, which includes ADHD, be celebrated and respected.

Neurodiversity has been around since the beginning of human existence. It’s part of being human.

It wouldn’t be at all surprising if it were one day discovered that most of all that dazzling cave art and ancient medicine was driven by neurodiverse minds – minds that think outside the box and excel at problem solving.

Neurodiversity Works does not approach autism as a disability, but rather, as an asset in a technological world.

While not every autistic child is a prodigy, and not every autistic adult is a genius, there is a statistically significant percentage of autistic people in the demographic of power thinkers who excel at careers that require prolonged, complex deep thinking and analysis.

Many children with autism spectrum disorder exhibit impressive attention to detail and can even present as miniature professors.

Many such children, teens and adults, in fact, do have high IQs. But this doesn’t always equate to easy, automatic employment.

The unemployment rate among high-end autistic people is dismally low when compared to the general population (neurotypicals). It’s not that they don’t want to work.

The challenge is finding gainful employment in a world that’s run by the type of mind that makes up the vast majority: neurotypical.

Neurodiversity Works prepares people with ASD, as well as ADHD and other developmental differences, for careers in the drone industry. Jobs can include piloting, analyzing, management and more.

It works with employers to advocate for hiring programs specific to neurodiverse thinkers.

Though the drone industry is rapidly growing, there’s a shortage of qualified applicants. Neurodiversity Works recognizes that this shortage can be filled by autistic people.

Jason San Souci is an autistic drone scientist. He is a graduate of the USAF Academy with a master’s of engineering from the University of Colorado. His mission is to elevate the drone industry through thought leadership and neurodiversity advocacy.