Do Two Conversations at Once Overwhelm ALL Autistic People? 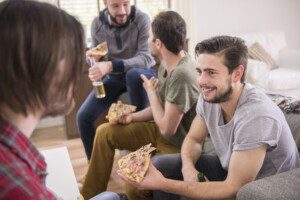 Perhaps you’ve heard that hearing more than one conversation at the same time is sensory overload and overwhelming to autistic people.

This comes up a lot in content written by autistic adults.

It’s not difficult to locate content in which the autistic author explains why they can’t stand being in rooms full of talking people.

In the spring of 2022 I was diagnosed autistic. As a result, I’ve developed a strong interest in attending get-togethers for autistic adults. I’ve been around neurotypicals all my life and wanted a refreshing change!

So I joined an autistic group. We met at a pizza place. There were 11 total people including the neurotypical caretaker of one of the autists, and the non-autistic adolescent child of another autist.

We all occupied three tables. And let me tell you, it was a constant buzz of voices – and loud.

At one point there were three autists at a table, plus me and another autist at a small table right across from them.

All of us were interacting while the other five people (including the caretaker and child) at the next table were also going at it. Trust me, it was not a quiet atmosphere. There was the continuous buzz of socializing that you’d hear at any pizza place.

The autist at my table did most of the talking (he was very talkative), and I, along with the three other autistic people, had no difficulty following him while we all heard conversations going on at the next table.

They also had no trouble following me, or anyone else in our group who took a turn speaking.

Eventually the 11th person showed up and soon joined the table of three autistics across from my table. He had no difficulty paying attention to the autist at my table while the buzz one table over went on.

Apparently, nobody at the neighboring table (three autists plus the two non-autists) showed any signs of sensory overload.

Everyone simply was just having a good time. If anyone was distracted, it was the neurotypicals a few tables down who periodically looked our way!

Eventually we all had to move outside because the two hours were up.

What was striking was that none of the four autistics who were talking got confused or overwhelmed by the other talking pair standing only feet from them.

In other words, Persons A and B were easily carrying on while Persons C and D – about a leg length away – were also talking up a storm. And this went on for several nonstop minutes.

But it doesn’t end there. Nearby was a playground with several young kids who were screaming and hollering.

They were LOUD. This didn’t phase Person A, B, C or D. They just kept going at it like nothing!

A few weeks prior I had met up with autistics at a large, popular bowling center. It was even noisier – what with big crowds on that Friday evening, along with loud music and pins being knocked over.

Half the group bowled while the other half sat at a table for socializing. Nobody had any problem paying attention to conversations amid a very loud ambience.

So how could this be possible? Where was the sensory overload or feelings of being overwhelmed?

First of all, bear in mind that a meetup at a pizza place and at a bowling center wouldn’t attract too many autists who easily experience sensory overload.

Those who struggle to pay attention to conversations amid the noise of nearby conversations or other sources of loud noise would likely pass on signing up for these kinds of activities.

Autism Spectrum Disorder comes with multiple stereotypes. One of them is the inability to follow a one-on-one conversation in a noisy or talkative environment.

The autistic men and women I was with, in both environments, were very much at ease amid all the sounds.

Other people on the Spectrum prefer quieter, more reserved atmospheres, such as card playing groups or discussions held at a library.

Quieter activities would be much more of an attraction for autistic people who need quiet ambience to focus efficiently on conversations.

The best way for neurotypicals to make sense of all of this is to remember a saying that’s popular in the autism community:

We don’t all flap our hands. We don’t all spin in circles, talk about trains, hum in public, speak in monotone voices or hide our eyes from others. We are as varied as are neurotypicals – maybe even more so!