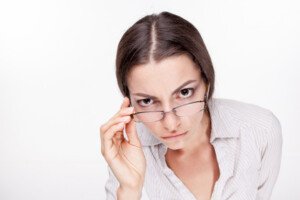 Do you wonder if you’re autistic? Then suddenly you think, “No way”? Do you keep coming up with reasons why you can’t possibly have autism?

It’s not uncommon for adults who are eventually diagnosed autistic to, at one point, flat-out deny that this could be a possibility – even if all their life they felt “different” or “misplaced.”

Denial is a powerful thing, and it isn’t necessarily fueled by stigmas or shame. It can be fueled by ignorance and misconceptions.

What might sometimes happen is that an adult begins tinkering around with the idea that they “have something,” that is, a condition that has a name, that can be identified by a psychologist.

They might suppose they have social anxiety, ADHD or some form of neurosis, maybe a personality disorder. They might even have fleeting thoughts they could be on the autism spectrum.

But then they reflect, “No, no, it can’t be autism because…(fill in the blank).”

Skeptical you’re autistic? Ways you might deny you could possibly have ASD.

“I have neurotypical friends.”

Autistic people can have friends, and some actively seek friendships.

“At school I was actually quite popular, but mainly because I liked to mess around and be a clown,” says Robin Young, 39, a fitness entrepreneur who was diagnosed with autism at 34.

“I’m not outgoing and did struggle to make friends, and found this was a way for people to like me.

“I did think that because I had friends and managed to get girlfriends, etc., that I might not be on the spectrum.

“I also thought that because I was able to perform on stage at gigs (playing piano and singing) that I was probably not meeting the criteria.

“In the end, it was the issues I had at work and school, and with relationships that prompted getting a formal diagnosis.”

There are social groups for autistic people who meet up for a variety of activities.

Though it’s true that some autistic people have zero friends and, in fact, aren’t even interested in having friendships, there are others on the spectrum who enjoy their friendships.

“I’m in sales/I once had a sales job and did very well.”

Many sales jobs involve scripts. I once had a phone job selling books. I had a script right before my eyes.

There are accomplished autistic actors (e.g., Anthony Hopkins). Certainly, some autistic people could learn to read a script over the phone in a way that sounds natural and convincing.

In fact, many autists rehearse anticipated conversations in their head that they might or will have with family members, coworkers, business associates or even imaginary sample people. A sales job is all about rehearsing and practicing.

I once read off a script when I set up coffee service demonstrations for a coffee roaster.

But my reading sounded natural, and eventually, I no longer needed the script.

I’ve been reading a lot of autism threads, and trust me when I say this: Quite a few autistic people are in, or were in, sales professions, including an autistic married couple who ran a car and pickup truck dealership.

I myself am a former certified personal trainer and was able to convince many people to purchase pricey training packages.

ASD can generate strengths in a sales context, such as not taking rejections personally and being skilled at answering any question a customer or potential client has – in detail.

“I’ve never had an autistic burnout.”

“Burnout is directly related to the amount a person masks, so many people who mask extensively have significant episodes of burnout,” says Dr. Jessica Myszak, licensed psychologist, and director of The Help and Healing Center, whose practice is mostly autism assessment for adults.

Masking means concealing autistic traits and trying to pass as neurotypical. If you’ve hardly ever masked or were never good at it, this can explain why you’ve never experienced a true autistic burnout.

Heavy masking requires a lot of analysis and practice, and is one of many coping strategies to fit into a neurotypical world. But not every autist is up to taking on this venture, and will find other ways to cope.

“I get jokes and sarcasm. I can also tell a good joke and be sarcastic.”

I’ve gotten jokes too. I’ve detected sarcasm, including “third-party sarcasm.” You know when you get sarcasm.

But do you know every instance when you miss it? The feedback doesn’t always come.

For every sarcastic comment you detect throughout your life, there could be four or five that you miss – and never know it.

And yes, sometimes an autist will get a joke. They might not think it’s funny, but they’ll “get it.”

There are even autistic comedians – such as Hannah Gadsby. There are autistics who insert humor in their YouTubes and TED talks.

Autistics can also be sarcastic — though not in a mind-game kind of way.

“I don’t have weird body movements. I walk normal. My hands don’t do funny things.”

Not all autistic people have stiff or peculiar body, arm and hand movements.

Some move neurotypically. They are no “less autistic” than one who exhibits odd hand gestures while waiting in line.

“I don’t have a monotone voice or act like Sheldon/Bones/Lilith/Monk.”

Listen to some autistic YouTubers. Many have “normal” voices. Some speak quite eloquently.

“Shows like The Good Doctor and Atypical shaped my view of what it meant to be autistic, and I’m NOTHING like those characters, so it was really hard for me to consider ASD as a possible diagnosis at first,” says Victoria Jones, an educator and entrepreneur who was diagnosed with autism at 30.

“Things didn’t click for me until I started following an autistic woman on Instagram and quickly learned that women and people of color don’t often fit the typical description of someone with autism.

“Prior to seeing myself and my quirks in other Black, autistic women, I definitely had the mindset of ‘It can’t be autism because I don’t talk like a robot and take everything literally.’”

For instance, since childhood I hated using standard-size spoons for cereal and pudding. It had to be a big soup spoon.

Only in middle age did I finally release myself from this restriction! I also never knew that aversion to clothing tags was rather common among autists.

However, if you don’t mind all three – loudness, bright store lights and collar tags – this doesn’t lower your odds of being autistic.

“I have great organizational skills. I’ve been on my own since 19.”

While some people on the autism spectrum require constant supervision, others ARE the supervisors or person in charge.

There are autistics who need no assistance planning extensive vacations or running a household.

“I’ve never had a meltdown or shutdown.”

It’s possible that most people on the high end of the spectrum experience meltdowns and/or shutdowns, if even very occasionally.

But there’s a small percentage who have found ways to cope with their neurodivergence without having meltdowns or shutdowns, or, perhaps upbringing or how they’re innately wired is the reason.

An autist may also have meltdowns inside their mind, meaning, imagining throwing a chair into a wall, kicking over a table, etc.

“Many of the people I’ve seen for autism evaluation have gone back and forth about whether they think they are autistic,” says Dr. Myszak.

“I think a major part of this is knowing someone who is autistic and thinking they aren’t just like that person, so how could they also be autistic.

“So much of the DSM criteria is subjective, and it requires knowledge of what is ‘typical’ to determine whether a person is experiencing things just like everyone else, or if there are some differences.

“It takes experience and learning to realize that you are missing social cues, or having more difficulty with lights or sounds than others, or having more trouble with friendships or romantic relationships.

“There is a fine line between what is neurotypical and what is not. Being on sports teams, being in a sorority or being a cheerleader, on the surface, can seem very neurotypical, but when you dig into the ‘why’ and what participation in these organizations looked like, people can have very different social experiences in groups like these.”

Another potential reason an undiagnosed autistic individual might think that they can’t possibly be autistic is that they have good eye contact.

Holding eye contact even briefly is problematic for some autistic individuals, but nobody knows what percentage of clinically diagnosed autists truly struggle with eye contact.

I can hold a gaze without any struggle. I can win a staring contest. Eye contact doesn’t hurt me. Does it always feel instinctive or natural? No. But I definitely give it. More on eye contact.

Robin Young runs Fitness Savvy and has a YouTube channel dedicated to building muscle and a stronger body. An entrepreneur, he also runs gardenfurnituresales.com where you can buy garden furniture at cheap prices. He’s based in Banbury in the UK.