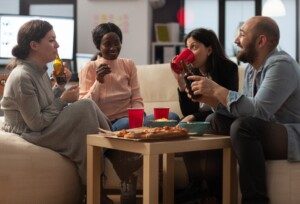 Do autistic adults avoid eye contact among each other? There’s a lot on the Internet about autism and the avoidance of eye contact.

With all the online information about ASD and eye contact, it’s tempting to conclude that avoidance or minimal eye contact is a universal trait among autistic people.

In spring of 2022 I was diagnosed autistic. I’ve always had the easy ability to hold eye contact as the listener. In fact, I’ve always relied on emitting my eyes towards others to get strong messages across. But this ability never stopped me from being on the Spectrum.

Since my diagnosis I’ve attended several events for autistic people, and at one particular event at a pizza place, I had the opportunity to be close up with fellow autists to observe their eye contact among each other. They didn’t know I was doing this until I revealed it.

I had conversations with five men and one woman. All gave me normal eye contact. Again, this was prior to me bringing up the subject to them.

Three of them confirmed they were giving eye contact (as opposed to convincingly faking it), but I didn’t ask the other two.

Of the other two, one exhibited normal eye contact while talking to me and another at the same time.

I was seated across from, but close to, a table of three men and one woman. Next to me was a man. A fifth man was at another table, and by then, I had observed he’d been giving normal-looking eye contact with anyone he was speaking to.

He admitted that in high school he had become aware of its importance and had made a point of improving it, but was unable to recall what it’d been like in earlier childhood.

When I wasn’t talking, I watched the four men and one woman as they talked among each other. They gave each other what appeared to be normal eye contact. I didn’t see anything unusual like death stares, intense and unblinking gazes or anything else that would suggest an abnormality.

I’ve read of several cases in online threads of people who, as kids, were hit in the face by a parent demanding eye contact. It had been literally beaten into them.

Others were encouraged to practice and practice. While still others took it upon themselves to learn it – not wanting to appear disinterested, deceptive or submissive.

I’d estimate that around 10 percent of thread posters said they’d never had any issues with eye contact, or, they could easily give it, but tended to overdo it.

It’s possible that at least one of these autistic individuals at the pizza place once avoided eye contact, but learned it with a lot of practice or – heaven forbid – had been repeatedly struck in the face by an angry parent.

It’s also possible that there was some masking going on: automatic but uncomfortable eye contact due to years of forcing it to appease neurotypicals or to appear confident, self-assured or trustworthy. So perhaps among at least one of them, it had become a habit (though uncomfortable) so that, even around other autistic people, they yielded it.

Yes, that’s possible … but … what were the odds that a subconscious masking had been present among all five people in a setting where they knew that dropping the mask was heavily encouraged?

I’m more inclined to believe that for whatever reason, all felt at least halfway comfortable with eye contact – especially since I hadn’t observed any excessive blinking, rubbing of the eyes or squinting.

Another tipoff that most likely, none were masking, was when I commented how refreshing it was to talk to a group of people up close at the same time and not feel I had to pay attention to making sure everyone got equal eye contact from me.

After explaining this, nobody said, “Hey, I’ve been masking with eye contact the whole time here.” Instead, two said that they fully understood. The others kind of nodded.

Though avoidance of eye contact is a very noticeable stray from conventional non-verbal communication, we also have to realize that when an autistic person actually holds eye contact, this gets very little attention.

When something veers from convention, it gets good attention. When something occurs typically, nobody notices. This creates the illusion that poor eye contact necessarily comes with autism.

Another stereotype is that autistic people are quiet and hardly talk. Though it wouldn’t be difficult to find a “high functioning” autistic adult who fits this bill, at least four in the pizza group of eight total were quite talkative, and in fact, the buzz of voices was louder than what was comfortable for me.

Remember, autism is a SPECTRUM.