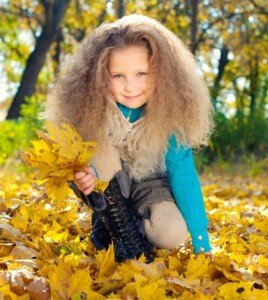 Subtle signs of mild autism in a child can easily be overlooked by even astute parents and teachers. Here’s a list of signs that you’d never think were due to Autism Spectrum Disorder.

Odd but Clever Use of Common Objects

I had a big tricycle. My oldest brother had a barbell set that included 10-pound weight plates.

One day I realized that a weight plate could mimic a steering wheel for my tricycle; the trike had a peg-like structure between the handlebars; a weight plate’s hole fit nicely over it; the plate rested there. I rode the trike around, “turning” the mock wheel.

In grade school I loved to draw. One evening during the Christmas season I took an interest in the cover of a Christmas carol booklet: an illustration of a girl from the neck up with blonde curls and a red Santa cap singing among snowflakes.

For about eight consecutive evenings, always with hot chocolate, I drew her (a new drawing each time) while seated at the dining room table. Same chair I might add.

In high school the teacher was summarizing a section in our psychology book. This included the book’s definition of intelligence: “The ability to successfully survive in one’s environment.” Everyone accepted this except me.

Raising my hand, I said, “According to that, sharks are very intelligent because they’re so good at surviving in their environment. Yet a shark’s brain is this small.” I motioned with my hand something tiny.

Does your kid do things like this, making adults think twice about something?

Child Rarely Laughs or Even Smiles

Must you always beg your child to smile for family pictures? “Not looking at the cameras for photos” is another tipoff, says Dr. Jessica Myszak, licensed psychologist, and director of The Help and Healing Center, whose practice is mostly autism assessment for adults.

Do you rarely hear them laugh? And when they do, is it at things that don’t make other children laugh? Do you wonder why your child “always looks so serious”?

When I was three or four I asked a cleaning woman at the bowling alley where my mother was in a league, “What’s that hump on your back?”

At the time, I didn’t know it was an abnormal curvature of the spine (hunchback).

The woman answered it was her apron, which I didn’t believe. I asked again, “But what’s that hump on your back?”

My mother replied, “She said it’s her apron.” She took my hand and led me away.

At the same age, I asked a woman in a lobby, “Why’s your face flat?” She was Asian, but I didn’t know anything about Asian facial features.

Before you admonish your child for “being rude,” consider the possibility that he or she is autistic and is very curious about people – despite not showing interest in socializing.

In grade school I invited Maryanne to come over my house.

This was triggered after Maryanne brought a gigantic seashell to class for show; I was enthralled (I had a seashell collection).

I figured if she came to my house, she’d then invite me to hers, where I’d then ask if I could have that big conch shell. She’d then give me the shell. But Maryanne kept refusing my invitation.

In grade school I invited Angela over my house. We weren’t friends; only classmates. But for some reason, I invited her over. I decided to teach her chess (she’d never before played).

After Angela left, my oldest sister, in her mother hen way, admonished me and said, “Couldn’t you tell how bored Angela was?”

Resistance to a Change but No Outburst

Absence of meltdowns doesn’t rule out ASD. In grade school my father would take us to play miniature golf.

One early evening my siblings and I were waiting in the car in the driveway for him to come out.

The younger, new next-door neighbor girl was outside, whom I didn’t care for.

As my father headed for the car, he asked if she’d like to come with us. She got permission from her parents and got in our car!

This very unexpected change in a routine unsettled me; I griped a little afterwards; no outburst.

“Getting frustrated if parents take a different driving route” is another clue to look out for, says Dr. Myszak.

Not all change unnerves autistic children. I always had thought it was cool when the furniture in my bedroom was rearranged.

But parents should be on the alert for “whining” or frustration over unexpected change that seemingly, other kids wouldn’t mind or even might welcome.

At age nine I was fascinated with window shades.

At one point I was fascinated by melting crayons. I’d remove their paper, place them broken in tin foil cups, then place the cups atop boiling water. My mother forbade this.

So I placed (unwrapped, of course) crayons on the top ledge of baseboard heat registers.

I got a kick out of these “bendies” because I could bend them like rubber once they were warmed up.

“Being obsessed with something particular (I had one little girl who was obsessed with watches — I had to remove mine during appointments,” says Dr. Myszak.

But the unusual interest needn’t be obsessive. If your child jumps from one oddball interest to another, even without an obsessive approach, this earns a spot on the autism radar.

Smarter than Older Kids, Even Adults

At 12 I was with a group of older cousins. All I remember was they were using a wristwatch to time something for one minute.

Whenever it was time to do another timing, whoever had the watch would wait for the second hand to hit the “12” before starting the 60-second timing.

I didn’t understand why they couldn’t just start the timing from anywhere where the second hand was, and just go 60 seconds out from that.

Finally I said, “Don’t wait for the second hand to be on the 12. Just start timing from wherever it is!”

My slightly older cousin Melanie, who had the watch, suddenly realized how inefficient the other approach was!

When I was around eight my aunt, whom I saw only four times a year, bought me a pair of tights with a pattern of flowers. I was SO excited!

I expressed bewilderment over how an adult could not think to buy a size that’s probably too big, rather than try to guess the exact current size — which then opens the possibility of guessing too small!

At least if the tights are too big, a little girl will eventually grow into them! I KNEW this as a young child, while my middle age aunt had been clueless.

Interests in Things Beyond Age Level

In second-grade my class was in the school library. While everyone was selecting skinny kiddie books, I noticed a small paperback about bowling in the “older kid” section.

I wasn’t into bowling beyond having gone on family trips, but something about that dense little book, with its cover photo of a man bowling, captivated me. The librarian wouldn’t let me sign it out.

Do you often say, “Look at me when I’m talking to you!” when admonishing your child?

Have you noticed that when adults outside the family explain things to them, the child’s eye contact – though directly on the speaker’s – seems fixed or too strong?

Have teachers told you that your child shows “disrespect” through their eye contact (either lack of or too much staring)?

The tough one about this is that even neurotypical children may think in black and white, or “take things literally.”

I remember when I was between five and seven asking my mother about blood from a gunshot wound on a TV show she was watching.

She replied, “It’s ketchup in real life, but blood for the show.” I didn’t understand this and asked again.

I continued questioning how it could be ketchup in real life, but blood for the show! My mother said never mind.

Though she could’ve solved the problem by being more explicit, it’s quite likely that a same-age neurotypical child would’ve understood the first time.

Ironically, a child with mild Autism Spectrum Disorder may begin questioning the existence of Santa Claus at an age younger than most NT children.

Dislike of Objects for No Logical Reason

Additional Subtle Signs of “High Functioning” Autism in a Child

• Walking around the edges of a room.

• Smelling foods before eating them.

• Insistence on foods not touching, or eating one food at a time (on a piece of pizza eating the pepperoni, then the cheese, then the crust).

• Lack of personal space; I’ve had numerous children who have wanted to touch the mole on my face.

• Noticing things that other people do not — (wanting to fiddle with the door stop, finding tiny pieces of rock salt in the carpet, etc.).

On that last point, I had no problem noticing, as a young child, that the exterior of the “Brady house” (“The Brady Bunch” sitcom) didn’t match the interior. I mentioned this to a neurotypical classmate who couldn’t see this.

When Parents Don’t See the Subtle Signs of Autism

Dr. Myszak explains, “Autism awareness is better than it was, but I still don’t think it’s where it needs to be.

“Depending on where the family lives and what they’re exposed to, I think there are still major gaps in knowledge and understanding.

“And autism can be tricky. For whatever reason, sometimes school personnel, early intervention providers and even other healthcare providers may not say anything about their suspicion of autism in children (due to how they feel the parent will take it, if it’s a regulation in their agency/state, or if they do not feel it’s their place to do so).

“On top of that, parents who may be autistic themselves and unaware of it may not see the signs because their child is ‘just like they were as a child.’”

If you keep wondering if your little boy or little girl is on the Spectrum, take it from ME – who was diagnosed with Autism Spectrum Disorder in middle age! – that it would NOT be in your child’s best interest to avoid an ASD evaluation!