A Doctor’s Own Experience with Aggressive Skin Cancer 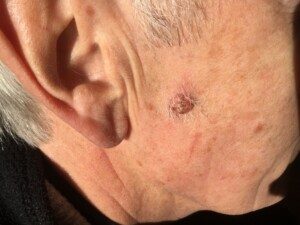 Eight years ago I developed a very slowly growing spot which became a nodule.

There was a dimple or crater in the top, and the edges had a pearly appearance.
Small blood vessels were visible coursing over the lesion.
This was a typical basal cell cancer (BCC) and was successfully removed under local anesthetic.
Six years ago I had a much faster growing skin lesion which was raised and grew to nearly half an inch diameter in 10-12 weeks [see above image].
It was crusty and scabbed and bled quite easily when touched.
In the early stages I thought this was a BCC. However, the rapid growth and appearance suggested a squamous cell cancer (SCC). This was confirmed when it was removed.
Two years ago I developed another scabbed skin lesion which I thought might be a SCC.
My dermatologist noticed another possible BCC which I hadn’t noticed.
Due to COVID there was a delay before I was listed for surgery.
By this time the lesion I had presented with had regressed and virtually disappeared – the presumptive diagnosis being an actinic keratosis [precancerous lesion caused by sun exposure].
The other possible BCC was proven to be benign.

Sometimes skin cancers can be easy to diagnose, but sometimes even the experts get it wrong.
People who aren’t the typical candidate for skin cancer can still suffer from it.
I didn’t have a warm weather holiday until I was in my 20s.
Although I enjoy being outdoors I rarely get sunburnt and tend to use the shade when in hot climates. My skin isn’t the sort that burns easily.
Melanoma. Usually a fast growing dark brown or black mole which may have an irregular outline and be raised. 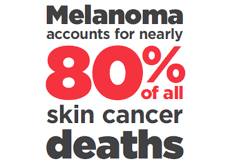 These need to be dealt with early because they can spread quickly to lymph nodes or the liver. 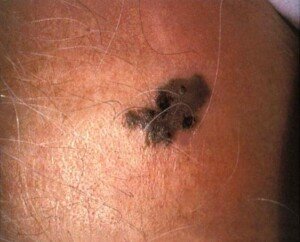 Squamous Cell Cancer. Usually grows fairly quickly and is often ulcerated or bleeds. As long as these are removed there is usually a good outcome. 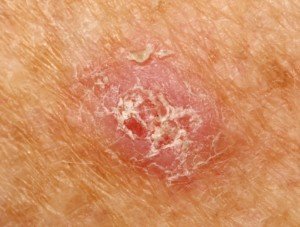 Basal Cell Cancer. Usually a slow growing nodule. May have a “crater” like appearance on the top and can bleed. 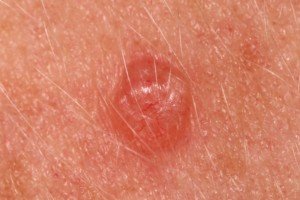 Months or years sometimes pass before these [BCC] are brought to the doctor. It’s unusual to get metastatic spread, but if they are left, a progressively large ulcer can erode adjacent structures.

On hot sunny days, when UV levels are high, use a high factor sun block on all exposed areas. Wear a broad brimmed hat and try to find shady areas.
Don’t let your skin get sunburnt, particularly if you’re fair skinned or redheaded.
Sun exposure increases the risk of sun damaged skin with the associated increased chance of getting a melanoma, squamous cell cancer and basal cell cancer.
Actinic keratoses and seborrheic keratoses are also more frequent. Dried out wrinkly skin is also more common.

Smoking and exposure to smoke ages the skin. Smoking causes a reduction in the blood circulation to the skin resulting in fewer nutrients and less oxygen getting there.
Smokers are at greater risk of getting squamous cell cancer, melanoma, acne and psoriasis, and wound healing is poorer.
Exposure to smoke impairs the production of collagen – a structural protein in the matrix of connective tissue – and causes other problems with connective tissue metabolism.