Chew Necklace Is Weirder than Chewing on a Toothpick or Nails? 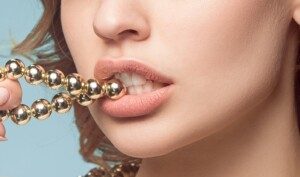 So a chew necklace is weird or babyish, but it’s manly for men to chew on a toothpick or acceptable for women to nibble on a pen?

This double standard needs some attention.

I was diagnosed with Autism Spectrum Disorder in spring 2022, but I don’t use “chew toys,” “chewelry” or other external objects to nibble on or bite on as a stimming (self-regulating) behavior.

Not every autistic person stims in this way. I’d much rather take deep, repeated sniffs of my fluffy, naturally fragrant hair while I have it pressed in a swath against my nose and mouth.

When it comes to stimming for autistic people, there’s almost limitless ways.

Chewelry is a big seller among autistic adults. Those on the Spectrum who work around people may be self-conscious about being seen biting on a necklace or bracelet.

And you can’t blame them. Let’s face it: If a neurotypical (NT) person were to notice an adult sustaining nibbling behavior with a necklace, they’d probably wonder, “What’s wrong with her?”

That very same NT, however, might be a nail biter or compulsive gum chewer!

Though nobody thinks that bitten nails are attractive, and many find this to be a “gross” habit, it’s still socially acceptable.

When an NT sees a typical-appearing person biting their nails, they don’t think, “That’s really odd. Why’s he doing that?”

But when the chewing is being done on a necklace – people will perceive this as weird, strange or childish – even though there’s no potential to draw blood or cause infection, as is the case with biting one’s nails or repeatedly biting at a lip!

Furthermore, what about men who have a toothpick stuck between their lips on the side?

I once had a job where an NT coworker often had a toothpick in his mouth all day long. Nobody thought this was weird.

Even in movies and TV shows, men chew on toothpicks: leading characters who are macho.

Yet geez, if the character repeatedly chewed on a necklace — even a manly-looking one such as a black oval pendant — this would evoke an entirely different viewer perception.

If a woman goes around with a toothpick at the side of her mouth, people might think she’s rough around the edges.

But if she has a purple chew pendant in her mouth a lot – the perception by NTs will drastically change.

She’ll be regarded as any of the following: neurotic, suffering from anxiety or having a mental illness.

“I agree that there is a difference in perception in adults who are chewing on a pendant or other form of chewing stim,” says Dr. Jessica Myszak, licensed psychologist, and director of The Help and Healing Center, whose practice is mostly autism assessment for adults.

“I think part of it is how obvious many of these items can appear — they can look somewhat childlike and be bright colors, so they are easily noticed and perceived to be out of place with an adult.

“Someone who is chewing on a pen or their nails may do these things when no one is watching, but someone who is wearing something that is meant to be chewed on is sharing that in a more obvious way.

“Because neurotypical people would be less likely to have a chew-stim, seeing someone with this might immediately set that person apart as not-neurotypical, and attract attention to that.”

When the Chew Necklace Is Removed from the Mouth

When it’s taken out of the mouth, it’s going to have saliva on it, which could be very noticeable.

The sight of saliva could be very unpleasant for some people. I can’t even look at a drooling baby. And forget a drooling dog.

The visible collection of saliva on a chew toy may be one of the reasons that neurotypicals view the use of dedicated chew objects as strange.

• Both autistic and NT people chew on things to relieve stress, boredom and/or to self-regulate.

• Like NTs, autistics will bite their nails, cuticles, skin, pens and pencils – but – they’re far more likely than NTs to also use chew toys or chewelry.

This increased likelihood may be due to higher frequency, in that they need an outlet while on the job, and a handy necklace will serve this purpose, especially if they need to use their hands a lot on the job. A necklace is also safer to chew on while driving vs. one’s skin or fingernails, freeing up both hands for the wheel.

“I think most neurotypical people are less proactive and less intentional about their fidgets and stims than autistic people,” says Dr. Myszak.