Do Dark Skinned People Ever Get Basal Cell Carcinoma? 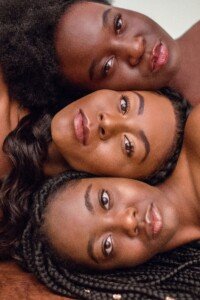 Even though basal cell carcinoma is a skin cancer heavily associated with sun exposure among Caucasians, those with dark skin can still get this disease.

Nevertheless, many people of color believe they are immune to basal cell carcinoma simply due to their high amount of melanin (pigment produced by skin cells).

This belief in immunity would be even more likely among those at the darker end of the spectrum who’ve spent a lot of time in the sun and have never burned – creating the illusion that nothing bad could ever happen to their deeply toned complexion.

But can basal cell carcinoma—which grows very slowly and is the most common skin cancer in the world—actually affect someone with a dark complexion?

“Yes, those with darker skin can get basal cell carcinoma in addition to other types of cancers,” says Neelam Vashi, MD, Assistant Professor of Dermatology, Boston University School of Medicine, and Founder and Director, Boston University Center for Ethnic Skin.

The many images online of basal cell carcinoma—which if left untreated for long enough will cause gruesome local destruction—show this disease in patients of light or fair color.

We don’t hear about epidemics of basal cell carcinoma—which is closely tied to lifelong sun exposure—occurring in parts of Africa where many people with deep dark tones spend a lot of time outdoors.

However, this doesn’t mean that it’s impossible for even the dark end of the dark spectrum to get this skin cancer – which, by the way, very rarely metastasizes.

Halder et al in the journal Cancer names the following as skin cancer risk factors for people with dark skin:

That last risk factor of moles pertains to melanoma, not basal cell carcinoma. But it’s important to note that darkly pigmented people are not immune to melanoma either.

Years of working outdoors is a huge risk factor for basal cell carcinoma — and having dark skin does not guarantee immunity. BCC is very intimately tied to sun exposure, as in the two patients below. 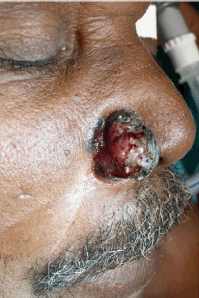 Every year one million U.S. people are diagnosed with basal cell carcinoma. Its occurrence in dark people has been estimated at 1.2% to 4.6% of documented cases, says The Journal of Clinical Experimental Dermatology Research (De Silva et al). 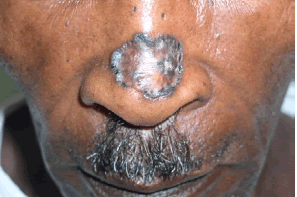 The two men above were both over 50 at the time of diagnosis (age is a risk factor for BCC) and had spent many years working outside for their job, without sunscreen, in the sun-strong climate of Brazil.

Certainly, the odds of dark skinned people with office jobs getting basal cell carcinoma would be enormously lower.

There hasn’t been much research into the topic of skin cancer in people with very dark skin, which include those in Southeast Asia, where some are very dark toned.

Due to the scant research, the incidence and mortality rates of BCC in blacks, Southeast Asians (e.g., India, Sri Lanka) and very dark Latinos is not known.

What IS known is that “different ethnicities with darker skin are at higher risk for particular skin cancers,” says Dr. Vashi.

And if you think that dark people can’t burn, you’re mistaken. Though a native of Sudan probably won’t burn if out all day in the summer sun, a person who’s much lighter — but considered “brown” by Caucasian standards — could end up with peeling skin by the end of the day.

Being that many white people delay seeking medical attention for basal cell carcinoma due to a variety of excuses, it would stand to reason that there are, as well, unreported cases of BCC in the black, Southeast Asian and Latino populations – both in the U.S. and abroad.

BCC is so slow growing that some people will become desensitized to the progressing lesion on their scalp or face, or they may attribute it to older age.

It’s usually painless and can appear as a mere blemish for many years before becoming a cosmetic issue.

Having no medical insurance will encourage continued refusal to seek a medical evaluation.

Thus, you have to wonder how many people, regardless of skin color, have an undiagnosed basal cell carcinoma yet go on to die of something unrelated – even at an old age.

Basal cell carcinoma will not be the first thing a dark skinned person will think of when noticing a newly-growing flat or pimple-like lesion on their face, scalp, neck, shoulder or elsewhere.

Dr. Vashi is a recognized leader in medical and cosmetic dermatology in the care of patients with skin of color. She currently has many active projects including skin hyperpigmentation, chemical peels and sun protection.