Causes of Barrett’s Esophagus Other than GERD 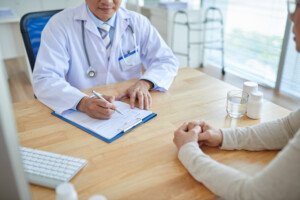 “The lining (epithelium) of the esophagus is normally what is called a squamous epithelium, exactly like our skin,” says Alex Little, MD, a thoracic surgeon with a special interest in esophageal and lung cancer, and clinical professor at the University of Arizona.

“Barrett’s esophagus is a condition in which the epithelium near the bottom of the esophagus is found to be glandular; it resembles cells found in glands,” explains Dr. Little.

“All these patients have GERD, and the understanding is that the acid that refluxes from the stomach injures the normal squamous epithelium — which is replaced by stem cells that migrate in and develop a columnar lining.

“There are no other known causes, although during fetal development columnar cells line the esophagus.

“They are usually replaced by squamous cells before birth, but occasionally ‘nests’ of columnar cells remain. This is not Barrett’s.”

About 10 percent of people with chronic gastroesophageal reflux disease will develop Barrett’s esophagus.

And most people with Barrett’s have a long history of GERD.

A study in Gastroenterology (2012) links smoking to Barrett’s, but the relationship is not clear.

There’s not enough evidence to date to show a strong correlation to smoking and this precancerous condition, let alone how the link occurs.

Type 2 diabetes and obesity have also been implicated as possible risk factors for Barrett’s, but again, the links are associative rather than causal.