Does Barrett’s Esophagus Always Cause Symptoms? 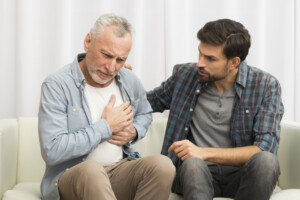 Do you have chronic GERD and are wondering if any of your symptoms are being caused by Barrett’s esophagus?

Is there a way to tell that you might have this precancerous condition?

Wondering if you might have Barrett’s esophagus can cause anxiety.

This is especially true once you know that the only way to confirm its presence is with an upper endoscopy, which requires sedation.

As you surely already know, GERD (gastroesophageal reflux disease) can lead to worrisome changes in the “food pipe.”

What exactly is Barrett’s esophagus?

“Barrett’s esophagus is diagnosed when the epithelium of the esophagus is found to be of a columnar nature rather than the normal squamous,” says Alex Little, MD, a thoracic surgeon with a special interest in esophageal and lung cancer, and clinical professor at the University of Arizona.

“The epithelium is the lining of the inside of the esophagus.

“Normally this lining is squamous — just like the outside lining of the skin.

“The esophagus does not contribute to digestion.

“Its purpose is to transport swallowed material to the stomach — so there is no need for the columnar cells — that are secretory — as they are able to produce and emit a variety of substances.

“In the stomach, for example, they secrete acid and digestive enzymes.

“The finding of columnar cells lining the esophagus is distinctly abnormal and constitute a Barrett’s esophagus (named after the British surgeon who first identified this abnormality).”

What are your symptoms?

“Barrett’s esophagus does not itself cause any symptoms, as it neither obstructs the esophagus nor interferes with normal function,” continues Dr. Little.

“However, patients with this epithelial abnormality all suffer from acid reflux or GERD.

“Although some people with GERD do not have symptoms, the great majority experience heartburn, and many also feel regurgitation of gastric contents into their esophagus or even into their mouth.”

The regurgitation into the esophagus only, may feel and sound like a common burp.

There may be many of these regurgitation burps every day, particularly soon after eating.

Excessive burping is not associated with having Barrett’s esophagus.

“Not surprisingly the abnormal epithelium is found when an endoscopic procedure is performed,” says Dr. Little.

“The indication for the endoscopy for patients with GERD is to look for evidence of esophageal injury by the acid or a Barrett’s esophagus, as either finding will influence treatment and follow-up plans.

“If a Barrett’s esophagus is found during endoscopy, biopsies are taken, as the abnormal epithelium is known to be a premalignant condition.

“If cancer is present it is staged and treated appropriately.

“If dysplasia — changes suggesting cancer is imminent — is found, there are several treatment options.

“If Barrett’s is present but neither cancer nor dysplasia is found, then the GERD is treated, and repeat surveillance endoscopies are performed every three to five years.”

In short, you should never think, “I’ve been experiencing (fill in the blank) lately; I wonder if Barrett’s esophagus is the cause.”