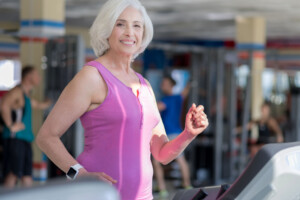 But don’t just move on it; do it the right way: effective walking on a treadmill to significantly lower the risk of developing Alzheimer’s disease.

Following will be guidelines on how to efficiently walk on a treadmill, even if you’ve been sedentary for years.

First, though, just how effective is exercise, including specifically walking on a treadmill, at lowering the risk of Alzheimer’s disease?

“As part of a solid health foundation that also includes balanced eating and not smoking, exercise can help stave off the onset of Alzheimer’s,” says Dr. Jacob Hascalovici, MD, PhD, a board certified pain management specialist and neuroscientist, and chief medical officer of Clearing, an online whole-body healthcare provider that treats pain from one’s home.

“In fact, regular exercise, meaning about 30 minutes of movement at least five times a week, can diminish the risk of Alzheimer’s by 45%.

“Exercise can help prevent cognitive decline in general, and is among the most powerful things you can do to take care of yourself as you age.”

A Study that Looked at Specifically Treadmill Walking in the Elderly

This study comes from the University of Maryland School of Public Health.

The conclusion is that exercise has benefits to cognitive skills in older adults at risk for Alzheimer’s disease (and of course, to those apparently not at risk).

Some older people get MCI: mild cognitive impairment, which is more than just the typical memory loss associated with an aging brain. Those with MCI are at greater risk for Alzheimer’s.

In the study, exercise was shown (via functional neuroimaging) to improve memory recall and brain function in those with MCI.

The elderly subjects did moderate exercise (supervised by a personal trainer) for 12 weeks.

There were two groups of sedentary people 60 to 88. One group had MCI and the other had normal brain function.

However, both groups had improved memory skills and enhanced neural efficiency while performing memory tasks.

The exercise intensity was moderate, meaning, enough to elevate heart rate and induce a sweat, but comfortable enough to allow conversation.

Brain Scans Before and After the Exercise Course

Images and tests were taken before and after the 12-week exercise program and showed remarkable changes in brain activity during memory tasks.

In fact, the brain regions that experienced improved efficiency corresponded to the same regions involved in Alzheimer’s pathology.

These include the temporal lobe, precuneus region and the parahippocampal gyrus.

• One of the biggest exercise blunders out there is that of setting a treadmill’s incline up as high as possible, then putting the speed to 4 mph or even 3.5 mph, then hanging on the bar in front as you tilt your body back at the same angle of the incline – cancelling out the effect of the incline!

This practice is absolutely worthless and should not be endorsed just because it involves more movement than sitting on a couch.

• If you’re going to commit to exercise, then do it correctly.

• You can use an incline, but if you feel you’ll fall off if you don’t hold onto the machine, this means either the incline is too high or your speed is too fast.

Adjust the settings so that you can walk without holding on, while at the same time, you can feel that your heart rate and respiration are elevated.

• If you were hiking uphill outdoors, you’d be walking very slowly. There’s no reason to set a fast pace on a treadmill when you’re using its incline feature. Swing your arms naturally.

• Hold on only for momentary balance checks. Holding on for the duration of the session will encourage bad posture and can lead to repetitive stress injury in the hips, which are forced to over-rotate when you hold on.

“Exercise is worth it because it helps with many of the risk factors for Alzheimer’s, including hypertension, high cholesterol, diabetes, extra weight and chronic pain,” says Dr. Hascalovici.

“It can also help with mental health conditions, such as anxiety and depression, that are often linked with Alzheimer’s.”