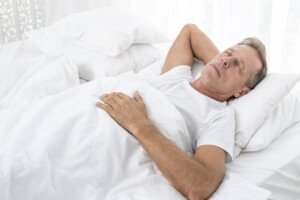 If you enjoy sleeping in or tend to sleep more than nine hours, you’d better watch out:

This is linked to a higher risk of Alzheimer’s disease and other forms of dementia.

“Sleeping less than six hours or more than nine hours a night is linked with a higher incidence of Alzheimer’s disease,” says Dr. Jacob Hascalovici MD, PhD, a board certified pain management specialist and neuroscientist, and chief medical officer of Clearing, an online whole-body healthcare provider that treats pain from one’s home.

“Sleep disturbances in general accompany the development of Alzheimer’s, and frequent napping during the day appears to both increase the risk of Alzheimer’s and its severity in older adults,” continues Dr. Hascalovici.

“While researchers cannot conclusively say that excessive sleep causes Alzheimer’s, it is associated with increased cognitive difficulties, including trouble with executive brain function, planning and memory.

“As the disease progresses, people tend to sleep more in general, possibly because it becomes increasingly difficult for the brain to carry out everyday tasks.

“Oversleeping could also be a sign of other medical issues, which a doctor should evaluate.”

Researchers, from Boston University School of Medicine (BUSM), calculated that sleeping too long (nine-plus hours) meant that subjects were twice as likely to acquire Alzheimer’s disease within 10 years when compared to subjects who consistently had under nine hours of sleep.

The team also found a peculiar pattern: Subjects who did not have a high school diploma, and who slept excessively, had six times the risk of developing a form of dementia within the 10 years.

Which came first: chicken or egg?

The astute person will immediately speculate that excessive sleep is a symptom of a problem that also leads to Alzheimer’s or other dementia.

In other words, a correlation between sleeping a lot and dementia does not establish cause and effect.

The report points out that causality was not established, and that the excessive sleep habits were likely a symptom rather than a cause of the brain changes – long before these neuronal changes began causing noticeable cognitive symptoms.

For these individuals, says the paper, sleeping less would probably not lower the risk of Alzheimer’s or other dementia.