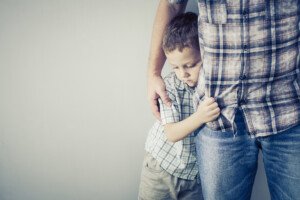 “Is it okay to make my child hug people against his or her will?” NO, NO and NO!

This article is about making (requiring, forcing) your child to “give a hug” to either someone they just met, or someone they’ve previously been in the presence of a few times or even more than occasionally (i.e., uncle or aunt, childhood friend of yours, “nice lady” at the candy shop).

Why do parents make kids hug people against their will?

Because some parents believe that if they DON’T say, “Give Aunt Alice a hug,” or, “Give that nice lady a hug for fixing your doll,” that people will think they’re failing to teach their kids manners.

Another reason is that parents think forcing hugs teaches their child to be affectionate.

But affection cannot be taught like math and vocabulary can be taught.

“Trying to force your child to hug someone is not only counterproductive, it can lead to dangerous consequences,” says Carole Lieberman, MD, a forensic psychiatrist and author of Bad Girls: Why Men Love Them & How Good Girls Can Learn Their Secrets.

“Children are not puppies who innately greet people with kisses,” continues Dr. Lieberman.

“They need to be given a lot of affection from their parents in order to spontaneously want to give affection back to anyone.

“And, if they are affectionate in general, except to someone they don’t spontaneously want to hug, it’s a red flag that parents should note.

“Maybe they don’t want to hug Aunt Alice because she smells of cigarette smoke.

“Or maybe they don’t want to hug Uncle Jim because he’s been touching them inappropriately.”

Dr. Lieberman mentions that if parents have been giving a lot of affection to a child, but he or she is still not affectionate, this could signal a neurodevelopmental condition such as autism.

But nevertheless, Dr. Lieberman continues: “In no case should you try to force your child to hug anyone, even though it may be embarrassing for you at times.”

Your child’s well-being always ranks higher than the alleged feelings of Aunt Alice, Uncle Freddy or that “nice lady.”

For what it’s worth, I have never, in my entire life, felt disdain towards any parent simply because they did not order their child to give me a hug!

Dr. Lieberman adds, “Forced hugs won’t teach your child to be compassionate or loving. Only your behavior towards them and towards the rest of the world will teach this.”

When parents make kids give hugs, whose best interests are the parents considering? Their OWN! People want to make a good impression, and, in their minds, what better way to do that than to order kids to give a hug?

So what’s wrong with making children give hugs?

It fails to take the child’s feelings into consideration. When’s the last time you felt like hugging someone you hardly knew or at least felt uncomfortable with? Think about that.

It’s natural for an adult to want to hug the stranger who just fixed their flat tire in the pouring rain.

But outside of major and minor heroics, many adults don’t care to hug people they barely or even casually know. Why should children? And if the adult is a relative, this should not matter.

Giving kids control over whom they hug or who touches them, teaches them that they have dominion over their bodies, and that nobody has the right to touch them “funny.”

Kids who feel they have the final say-so with whom their body comes in physical contact are far more likely to immediately report sexual abuse after the first time, rather than stay silent for years and years while the predator violates them over and over.

Dr. Lieberman explains, “Forcing your children to yield their body to someone they don’t want to be in contact with, teaches them to do this in other situations, which makes them vulnerable to being a victim of sexual abuse.

“It makes kids believe that they have to please others who want to touch their body. This makes it less likely that they’ll recognize how wrong sexual abuse is, and be less likely to refuse these advances and to report it right away.”

Parents also need to consider how the recipient of their child’s hug feels.

That “nice lady” who fixed your daughter’s doll doesn’t necessarily like to be hugged by little kids (or anybody, for that matter) unless she’s very close to them.

But is hugging a child such a bad thing for the adult?

To some, yes. Everyone has a threshold. What’s yours?

Little girls, more often than boys, are ordered by parents to hug adults.

And women, more than men, are solicited as the recipients!

Dr. Lieberman points out that “there is an unfortunate expectation that girls are supposed to be more affectionate and compassionate people pleasers.

“But, forcing kids to hug someone indiscriminately teaches them that giving their love isn’t something special that should be reserved for special – whether this love is the warm friendly kind, familial, romantic or sexual.”

If you’re still not convinced of any of this, then what’s the cut-off age after which you will not order little Dakota to give her Aunt Alice a hug? When she’s nine? Ten? Or 12 and a half? Or 15?

If hugging is so important, why is there that cut-off age, and gender preference of female for both child and recipient?

Will you force your 15-year-old son to give a 30-year-old neighbor, Steve, a hug after the man fixes his skateboard?