What to Do when Strangers Want to Hug Your Child 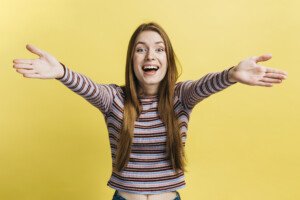 The feelings of the stranger who wants to hug your child never take priority over what your CHILD wants.

Here’s how to handle it when adults whom your child barely know or have just met want to give them even a “little” hug.

“How to handle this situation is based upon the child’s age and personality,” begins Dr. Tia Kern-Butler, a licensed psychologist for over 20 years who treats a broad range of issues including relationship problems and behavioral issues of children and adolescents.

“Some children, even young ones, will refuse to hug a stranger all on their own,” continues Dr. Kern-Butler.

“Parents should respect this and never scold, shame, embarrass or force their child to allow someone to touch them when they do not want them to.”

How to Handle when a Stranger Wants to Hug Your Child

The adult may also be someone the child has known for a while, but only marginally. Your child may also not be the hugging type.

Your rights outrank the stranger’s rights.

Even if you’ve known the adult for a while, and unexpectedly that person wants to hug your child — and you KNOW your child would be uncomfortable with this — you have as much right to prevent this cross-the-boundary form of communication as you do in stopping an adult from giving your child a liter of sugary soda.

“If a stranger asks to hug your child, and the child themselves does not say ‘No,’ the parent should then step in and set the boundary with that adult,” says Dr. Kern-Butler.

“This may be uncomfortable for some parents who have a hard time setting boundaries for themselves or worry about social politeness.

“Such parents need to place the psychological well-being of their child ahead of what some stranger might think about the hug boundary.”

Do not give in to the adult who wants to hug your child against his or her will.

“The adult who initiates this is the one who is in the wrong, and a parent can acknowledge this in an assertive and non-confrontational manner,” says Dr. Kern-Butler.

“Simply saying, ‘I’m sorry, I don’t mean to embarrass you, but in our family we do not hug someone until we know them well; I’m sure you understand,’ can send the message.

“Or, ‘I’m sorry, we have taught our kids it’s not okay to hug someone they’ve just met; I’m sure you understand.’”

Yes, there are adults who won’t even give a signal; they’ll barge right into the child’s personal space and throw their arms around them.

The good news is that such aggressiveness is rare. Adults who lack a social filter will usually make a comment before proceeding with a hug, such as, “Let me hug your son!”

The adult may start advancing towards the boy — and that’s when you should NOT stand by idly.

Otherwise, from your child’s perspective, you won’t come across as their advocate or ally.

And at some point afterwards, you’ll want to kick yourself for ranking a rude person’s feelings above your values and your son’s ownership of his body.

Put your hands up and say, “Excuse me, time out. Let’s see if Tony wants a hug. He has the final word.”

Tony will already know this is coming, because you will have already “coached” the boy at home to prepare for such an unexpected and awkward social moment.

You have already, during the coaching, assured him that he DOES have the last word, and that all he has to say is “No thank you. I prefer a handshake,” or, “I’d like a high-five instead.”

For a softer response, you can ask your child, in the presence of the hugger-wannabe, “Would you like (name of individual) to give you a hug?”

Again, you will have already prepared your son or daughter for this experience, and they will already know it’s okay to refuse the hug.

If the adult is taken aback by a rejection of the hug request, just remind yourself that you just strengthened the trust that your child has in you, and you also reinforced in him or her that they have dominion over their bodies. No stranger’s feelings override that!