Skin Indents All Over Your Arm from a Tight Sleeve 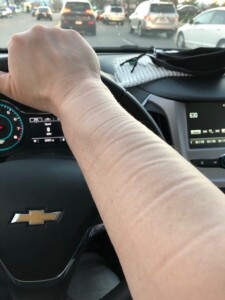 Here’s the reason for all those indents and marks on your arm after wearing a tight sleeve or leaning your arm into something with texture.

Even wrinkles or patterns from fabric will imprint into your skin if the sleeve is tight enough.

The indents in the arm pictured above were revealed after the driver removed a lightweight sleeve that slips onto the forearm to shield skin from sun exposure while driving.

The sleeve for that individual was very tight, and its wrinkles cast imprints into the skin.

Leaning an arm for an extended period of time on a textured armrest or even a phone cord can cause an indentation in the skin.

Many people don’t give a second thought to this, while others have wondered if this means a medical problem – namely, edema.

Edema is fluid retention in the body and usually has a serious cause such as a problem with the heart, liver or kidneys.

If you have a family member with edema or lymphedema, you’ll be more prone to worry that the indents on your arm are from a disease process.

“The total body water is spread across different compartments of the body,” says Dr. David Beatty, MD, a retired general practitioner with 30+ years of experience and an instructor of general medicine for 20 years.

“About 67% is inside the cells of the body (intracellular),” continues Dr. Beatty.

“Seven percent is in the vascular system; in arteries, arterioles, capillaries, veins and the heart.

“One percent is in the cerebrospinal fluid (CSF).

“Twenty-six percent is in the fluid that bathes and surrounds the cells (interstitial fluid).

“Fluid also moves between cells and interstitial fluid according to the pressures that are exerted there.

“When the body is dehydrated the pressure within the cell will be relatively low, drawing water in from the interstitial fluid. When well-hydrated the opposite is true.”

Cause of Indents in the Skin on Your Arm 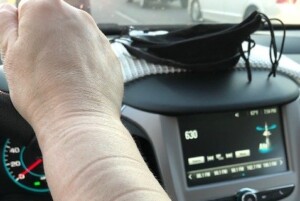 Dr. Beatty explains, “If the skin is pressed with the end of a pen, for example, you can see the pressure point.

“If skin has only been pressed for a short while, there is a brief indent which usually resolves within a few seconds.

“In this case interstitial fluid has temporarily moved around in the space between the body’s cells.

“In a case where someone has fallen asleep on their arm on a patterned settee, the situation is a bit different.” Same as if their arm were confined within a tight sleeve.

“To begin with, interstitial fluid will move around in the interstitial space because it can do this easily and quickly.

“Body cells and blood vessels have cell walls, so water movement across these is a bit slower.

“If the arm is being pressed for minutes or hours, then the cells become squashed. This raises the pressure within the cell and gradually forces fluid out of the cell.”

In the case of the arm of the driver, the cells were really squashed, because he reported that the arm sleeves (to shield the sun’s rays) were very tight.

Dr. Beatty continues, “If a vein is being squeezed, the pressure rises within it, and this can lead to a buildup of fluid below the level of the constriction.

“Because of these factors the indentation and the adjacent swelling can last longer, possibly up to an hour or so.

“Once the pressure has been taken off it takes time for the cells, the interstitial fluid and the veins to get back to their normal state.”

How can you tell the difference between this normal process and actual pitting edema, which means a medical condition? 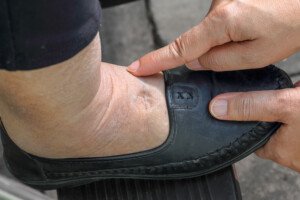 It’s simple. Take your fingertip and press hard into your arm – then release.

If you have pitting edema, an imprint from your fingertip will remain there for up to 15 seconds and even more than 20 seconds.

If you don’t, there will be NO imprint – even if your arm’s skin looks like the one in the images here after wearing tight sleeves or having it against a textured object for an extended period.