Wife Abusing Her Husband: Signs a Woman Could Be Violent 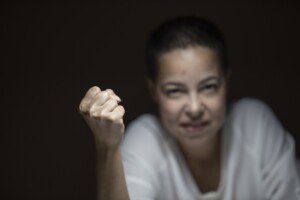 Women can be violent, but what are the signs she might be capable of this kind of behavior?

And the mistreatment isn’t necessarily physical; a woman can use her mouth like a fist and savagely attack the man in her life, ferociously cutting him down — the same dynamic that occurs when the gender roles are reversed.

One of the most publicized cases in which a woman emotionally abused her husband was that of Jon and Kate Gosselin.

Millions of viewers witnessed her recurring belittling and criticism of him on their TLC reality TV show, “Jon & Kate Plus 8.”

Signs a Woman Might Abuse Her Husband or Boyfriend

Tina B. Tessina, PhD, is a licensed psychotherapist in Southern California who counsels individuals and couples, and is author of over a dozen books including “It Ends With You: Grow Up and Out of Dysfunction.”

According to Dr. Tessina, signs a woman can be abusive towards her husband or boyfriend are as follows:

“She can also abuse a man financially  –  by not contributing equally to the family, by spending money irresponsibly, by not respecting his work and his contributions to the family,” explains Dr. Tessina.

Signs a woman has the potential to abuse her husband or boyfriend can take many forms, and can escalate to any of the following: controlling his money; dictating whom he can visit or have over the house; monitoring his phone calls; destroying or damaging his belongings; and making disparaging comments about him in social settings.

What about physical harm?

“Relatively few women are physically abusive,” says Dr. Tessina.  “There are some, but in most cases, men are stronger and don’t have to submit.”

My brother was once married to a woman whom he could have easily scooped up and carried up a flight of stairs. One day she had a fit and threw an iron (for de-wrinkling clothes) at him.

She missed, but the throw was hard enough to put a big dent in the wall. This woman was physically bullied by her mother.

Sometimes, an abused little girl grows up to be the perpetrator, not the victim. My brother ended the marriage after two years.

Are women who abuse men usually bigger than their victim?

Dr. Tessina explains, “No, it’s not necessary for her to be physically larger.

“If he has the same kinds of low self-esteem, or a masochistic need to be abused or controlled, he can be abused by a smaller woman.”

In general, signs that a woman can be abusive towards her husband or boyfriend is when she doesn’t respect her new man; dismisses his feelings; insults him; tries to control him and shows jealousy, especially of his spending time with his family.