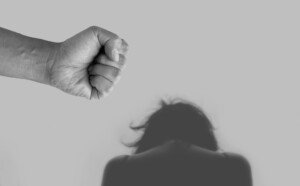 It’s so false that “any” woman can remain with an abusive man.

For purposes of this article, domestic violence is defined as staying with a physically abusive partner.

Though seemingly any person can get struck on their first date, this is a far cry from actually staying with an individual who continually behaves abusively.

Again, I emphasize: This article pertains only to the concept of remaining with the physically abusive partner.

To believe that domestic violence can happen to any woman is to believe that no such thing exists as a woman who has quickly ended a relationship after being hit just once by her man.

However, women DO end relationships after the first hit.

Women who have terminated relationships or filed for divorce, after being struck just once, are women who refused to let domestic violence (staying with abusive man) happen to them. 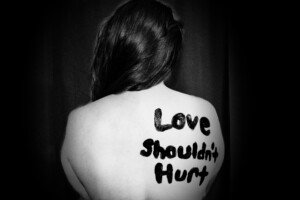 “These guys think they are God, they can do whatever they want to with their property (the women), and the women drawn to them frequently grew up with the same personality type as a father figure,” says Mary Jo Fay, RN, MSN, author of “When Your Perfect Partner Goes Perfectly Wrong.”

She adds that the women “seek out this behavior pattern simply because that’s what they know and seems familiar … whether they liked being treated that way by a horrific parent or not.

These predators can also sniff out those very women to be their victims. Emotionally healthy women will spot them in a heartbeat and won’t play the games.”

To believe that domestic violence can happen to any woman (i.e., any woman is capable of having her self-esteem “chipped away” by a control freak), is to believe that women don’t have the wits and inner strength to leave an abusive man.

However, this is absolutely false, because plenty of women end the relationship or file for divorce  —  promptly following being assaulted for the first time. Not hundredth time. FIRST time. Sometimes even before that.

My cousin had her marriage annulled upon returning from her honeymoon. She had fallen in love with a man who lived out of his car.

She insisted to concerned relatives that this man was of high character.

Guess the man just couldn’t hold out the Prince Charming act any longer once on the honeymoon, and exhibited alarming temper outbursts, though he never hit my cousin. But she had foresight and had that marriage annulled.

This is a woman who spotted the predator in a heartbeat and ended the game before it began.

The woman across the street from me sent her angry husband packing; the cops came over; he packed up a large suitcase and took off in his car. The woman told me he didn’t hit her, but that she feared he would.

So she took action in anticipation. He hasn’t returned. This is a woman who won’t even stay with an angry man; why should we believe she’s capable of staying with an abusive man?

So what kind of woman, then, CAN end up staying with an abusive man? 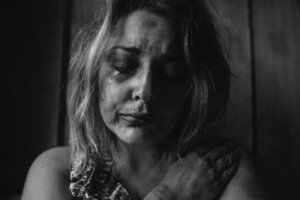 “Men who are violent and controlling do tend to pick certain types of women — the ones who will put up with them,” says Tina B. Tessina, PhD psychotherapist and author of “Money, Sex and Kids.”

“The controlling starts out feeling great to a woman who wants to be taken care of, and is a little hesitant about being on her own,” says Tina B. Tessina, PhD, a licensed psychotherapist in Southern California who counsels individuals and couples, and is author of over a dozen books including “It Ends With You: Grow Up and Out of Dysfunction.”

“It gradually progresses, and if she doesn’t understand that she needs to not ‘be nice’ and to set firm boundaries immediately, he understands that he has free rein to treat her as he wants to,” says Dr. Tessina.

“She may have lived in a family where the father was controlling and/or abusive, or where there was no father.

“She is usually loving and accommodating, and doesn’t know how to take care of herself or her children as the problem progresses.”

And what sort of woman would never remain with a controlling or violent man? Says Dr. Tessina:

“Women who don’t want to be ‘swept off their feet’ or taken care of are much less susceptible to abuse or staying with abusive men.

Women who are low in self-esteem are vulnerable to the charm that abusers use to lure victims.

Women with dependent children who feel inadequate to raise their children alone may also submit to abuse.

Strong, independent women who are not bound by such limits normally will not put up with bad behavior, and will leave early in the relationship, or at whatever point the abuse surfaces.”

Why is it hard for some individuals to accept that there exist women would never permit themselves to stay in a relationship with an abusive man?

Is it because men are taller an weigh more than women?

This theory dissolves because, as noted previously here, relationship violence can also be in relationships between gay people, as well as female abusing male.

Obviously, height, weight and muscle size are not the core mechanism. It’s psychology.

Every 37 seconds, a man is physically abused by an intimate partner, according to Claudia Cornell, PsyD, and Kimberly Taylor, MS, and this statistic is derived from the Department of Justice/Center for Disease Prevention and Control report on the National Violence Against Women Survey.

In most cases, “…the abuser is the man’s wife or girlfriend,” says Taylor, Program Director to Alternatives to Domestic Violence (Corona, CA), and co-author with Dr. Cornell of “Trapped in Silence,“ which focuses on the hidden truth of men being victimized by their wives or girlfriends.

It’s not about being unable to fight off the bigger, stronger abuser. It’s not about women who feel no choice but to stay with a violent man because of the children, especially because often, there are no children.

It’s not about being afraid to leave because the man threatens to kill her if she leaves; not all abusive men, with whom women stay, make these threats.

It is about individual people. “…not all women nor men will stay in an abusive situation,” says Taylor. “There are factors that lead to someone being with an abuser and also staying with an abuser.”

To insist that any woman out there can remain involved in a harmful, abusive relationship is to believe that any lady can play the abuser role; that any man out there is capable of staying with a violent woman; that any man, and this includes kindest, gentlest, sweetest guy you know, can be that abuser. Think about that.

To say domestic violence can happen to any woman is to ascribe gender superiority to men, and gender inferiority to women.

It’s to say that women are always the weaker sex. Yes, this is precisely what “Domestic violence can happen to any woman” translates to.

Otherwise, why not take this a step further and assert that any woman can become a hooker, coke addict, bank robber or anorexic?

And if any woman can be a victim of domestic violence, then this certainly means any man can be the abuser.

So if any man can be the abuser, this means any man, including your dear, sweet, wonderful husband, father, brother or wonderful adult son, can be a rapist, puppy beater, child beater, drug dealer or pimp.

ANY man. ANY man can be a coldblooded murderer, even. Thus, what happens to one man (the abuser), or one woman (the victim), can be applied to every man, every single woman ? Think about this warped reasoning…please.

Be careful what you insist upon is fact. Because any given woman, in any given circumstance, does NOT represent every woman on this planet.

To say that domestic violence can happen to ANY woman is to give supernatural powers to all men. A woman doesn’t “make” a man beat her.

The beating drive is already humming inside these men. All they need is the target. And hence, they are drawn to certain kinds of women.