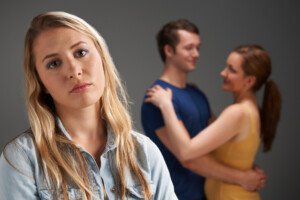 For very tall women, worrying about ever finding a husband can be a very hardcore reality, being that many tall men go for “the short girls.”

Some tall women of at least six feet believe they have a very limited pool of men from which to choose, since hoards of men stand between 5-10 and six feet.

Tall women may believe a husband will never be in the picture because most men are not over 6-1; or, perhaps some tall women believe that few men under six feet would be interested in a woman of at least six feet.

There is a Web site for tall women that has a “tall quotes” page. Tall women are welcome to post comments, and the concern over finding a husband comes up on a recurring basis. Check out this posting, copied word-for-word, from the site:

OMG, I feel so embarrassed in school. By the way, I turned 17 in January and I just feel soo insecure sometimes – it’s just too bad.

Sometimes I realise that some of the boys like me but they get intimidated by my height. It’s soo uncomfortable… it makes me wonder about my future husband.

How can we help Gisele and tall women like her? We need to first know if Gisele, and like-minded tall women, have automatically scratched shorter men off the list of potential husbands because they’d feel awkward looking down at their husband.

So that leaves only men over six feet, which greatly reduces the pool of husband prospects.

On the other hand, maybe Gisele wouldn’t mind at all dating a shorter man, but believes that shorter men wouldn’t be interested in her; or perhaps she’s approached many shorter men, and none were interested.

This is vital information, because if Gisele is open to dating shorter men, she’s already doing a good job of seeking out a possible husband.

But if Gisele, as well as other tall women, will not give shorter men a chance, due to 1) Feeling awkward, 2) Societal expectations that the man be taller than his woman, and 3) Not wanting to feel “huge” around a man, then Gisele is making a big mistake.

The funny thing about this is that many SHORT women face a similar problem!

Here we have quite a few tall women who simply will not give a man under six feet the time of day. She worries about finding a husband since fewer men are at least 6-1.

But if a short woman shares the same sentiment about not wanting a man under six feet, she sort of ends up in the same boat as tall women who won’t look at a shorter man!

A 5-3 woman wants a man who absolutely must be six feet minimum: This limits her choices.

However, the short woman actually has a better crack at finding a husband, because some tall men want only short women!

In fact, it’s not uncommon for tall women to point out that the short girls take men away from them.

This very complaint was posted in one of my other articles about tall women. I have also seen this complaint come up repeatedly on the “tall quotes” page of the Web site.

I’ve seen it on a few other threads on different sites about height and dating.

Short women want tall men to feel protected, since being short can make a woman feel vulnerable. Tall men who want short women want to play the role of protector; they’ll definitely feel this way if their lady is a shortie!

Gisele needs to be less restrictive on her height requirement, and hang out where many tall men gather, like at a health club.

Maybe she could learn volleyball and eventually join some leagues, including recreational level leagues.

She can place online and print ads that include her height. She can read these interviews with men who love tall women to keep her hopes up.