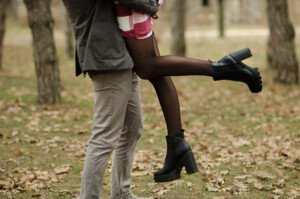 I don’t know; maybe a tall woman sees only what she expects to see in the world of meeting men.

Tall women seem to have made this observation more than shorter women, when it comes to meeting men.

You can learn a lot about what tall women think by reading online forums.

My experience is that usually, tall men are with tall women, and…short women are with short men.

In fact, I see this all the time: A short man with an even shorter woman! Even if he’s around 5-5, his woman is almost always shorter!

Quite often I see really tall women with even taller men. However, I have indeed seen tall men with their arms around a pint-sized woman.

According to many tall women who post in forums, tall men have a preference for short women for one notable reason.

Tall men feel threatened by tall women, even if the tall woman isn’t as tall as he is.

A number of posts on a popular site for tall women make this claim. Many of the claims are based on first-hand experience by very tall women who get rejected by even taller men.

The theory is that, for example, a man who’s 6-2 doesn’t quite feel he’s the protector or superior in the relationship, if his woman is only three inches shorter, let alone equal in height.

But his protector instinct really kicks in if his girlfriend is 5-5 or 5-3. But what if she has a black belt in karate or is a competitive power lifter?

Will the tall man feel threatened and go back to that lanky 5-11 woman who asked him out?

Maybe this phenomenon is true in some cases; that the protector instinct is dismantled by a woman who’s as tall as most men.

But what about the possibility that a 6-3 man was drawn to a 5-3 woman because of her smile, eyes and laugh  —  three items that often draw a man to a woman in the first place?

What if that petite little thing just happens to have common interests with that tall guy? What if there’s chemistry, and the height difference is just a coincidence?

WHAT IF…that tall man, whom the tall women think is theirs, actually judges that short woman by what’s inside her?

According to the posts, some tall women believe that the tall men, indeed, belong to them because it’s very hard for them to get boyfriends; whereas, short women can have their pick because even a short man of 5-7 wouldn’t feel “intimidated” by a woman of 5-3.

As one poster says, “Short women have a sea of men to choose from, and we don’t.”

There is this feeling that the short girls “take” the tall men away from the tall women. I’m 5-8, and I’ll be honest with you: The ideal height for me, in a man, is 6-2.

But 6-4 and over is just too big, not relative to my size, but just in general.

Keep in mind, too, that many men add an inch or two to their height when giving it out.

Visit tallwomen.org for all sorts of resources for the vertically blessed (not “challenged”!) woman.