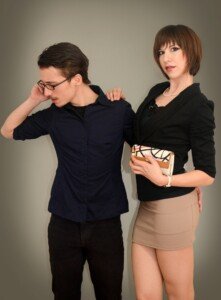 Many tall women claim that they don’t feel “protected” by a boyfriend unless the man is taller.

I get this strange information from a site that’s targeted to tall women. I’ve read many posts on that site, and a common element is that a major turnoff of dating a shorter man (even if “shorter” means he’s six feet!) is that the taller woman does not feel physically secure or “protected” by him!

It’s common for women (and tall women are no exception) to want to feel “protected” by the man in her life.

What I have a problem with is this myth that a man must be taller than a women in order to have protective qualities.

Being tall is worthless if you can’t throw a punch. Tall women should ditch the idea that a shorter man cannot protect her. Taller men aren’t necessarily stronger, either.

There are short men who can throw very mean punches and move as quick as a panther.

If tall women don’t like the aesthetics of a shorter man, that’s more understandable. But to be comfortable ONLY with taller men just because of this “protection” thing ??

Oddly, there ARE tall women who say one of the advantages to being very tall is that they feel safer; a 5-10 man would rather attempt a rape on a 5-5 random woman than a six foot tall random woman.

The average American male stands 5-10. I wonder what the average height difference is between rapists and their victims — when the victims didn’t know the rapist.

I’d bet that in most cases, the rapist is at least four inches taller, and in very rare cases, the woman sees eye to eye with the rapist, and in extremely rare cases, she’s taller   —   as it, once again, applies to victims who did NOT know their attackers.

This desire to “feel protected” seems to arise from factors unrelated to height (hence, why tall women are capable of feeling this need as much as short women), but more related to all the factors in a woman’s past that contribute to her sense of self-worth, self-confidence and self-reliance.

Evolutionary scientists believe that a woman’s burning desire for a taller man roots back to evolution. On the other hand, many tall women insist a man be taller simply because of appearances.

Another reason is, unfortunately, the woman worrying what others will think if the top of her boyfriend’s head comes up to her eyes.

But back to this idea that a woman won’t feel secure and protected unless her boyfriend or husband is taller than her.

EVEN THOUGH the thug he’s protecting them against is the SAME PERSON!

So according to the logic of these tall women, a 5-7 man is capable of beating up the 5-7 or 5-11 thug ONLY if the girlfriend is shorter!

But if she’s taller than the boyfriend, he suddenly can’t throw a punch!

Please Lord, help me understand why some (not all, but some, and maybe only a small percentage at that) tall women don’t feel safe with a shorter man. Really, whom do you think could protect you better: 5-7 Fonzie or 6-3 Kramer?