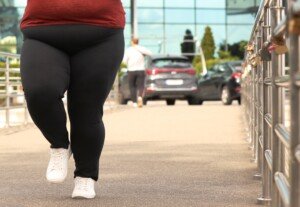 At least one morbidly obese influencer speeds up her exercise videos – obviously to trick followers into thinking she could move faster than she’s actually capable.

I was inspired to write this after viewing yet another exercise video posted on a morbidly obese influencer’s Instagram account.

This influencer and TikTok star, who weighs in at 330 on a 5’9 frame, has sped up videos of herself walking on a school track, trotting several yards on grass and doing calisthenics.

One might say that she does this to get as much video as possible into a limited amount of time.

But this defense doesn’t make sense when the video is only 30 seconds.

If one doesn’t look a little closely at the sped-up video of her walking around the track, it may appear that she’s trotting.

It’s not difficult to tell when a video of someone walking (or very slowly lumbering) is sped up — though presumbably, some of her over 700k followers are being fooled. In fact, I spotted a comment on how fast she could move!

Certainly, there’s more than one viewer who’s being deceived.

As for the YouTube of this morbidly obese woman “trotting” across some grass, there were several comments to the effect of, “I can’t believe someone that big could move so well,” and, “How does someone that size move like that?”

It’s amazing how viewers can’t detect that these films are sped up.

So why does this concern me?

Because when I was a personal trainer, I was very strict about safety and the truth.

This influencer’s message seems to be, “You can be healthy even when you’re 330 pounds. I can prove it; look how fast I can move.”

Yes, this is a dangerous message!

Vulnerable followers may be thinking, “Wow, if she can move like that, then being very fat isn’t so bad after all.”

She needs to be honest with her followers and not speed up the footage.

Adoring fans won’t have any problem watching her for two minutes instead of 30 seconds.

She should present herself in realtime or, at least, include in her caption that the video is sped up. She shouldn’t assume everyone will be able to tell.

What other reason is there for her to speed up the videos and not inform her followers than to want to make them — as well as any skeptics visiting her page — believe that someone so huge could move fast?

It’s understandable when videos of hair and makeup tutorials are sped up. In realtime these can take 45 minutes or longer.

But why would someone condense what was probably only a two- or three-minute walk into 20 seconds — or, condense a 20-second trot up a hill into five seconds?

Now think about that. It’s NOT a time issue. Her adoring fans would not be bored watching a little longer in realtime.

I’m banking that a significant number of her hardcore followers don’t realize the videos are sped up.

Can a morbidly obese person ever move quickly from point A to point B?

When I was training very heavy clients, I never expected them to move fast. All I expected was hard effort, even if all they could do was reach a speed of 3 mph for 20 seconds.

For interval cardio training, my instruction was to “move your fastest,” NOT “try to get up to 8 mph on the treadmill.”

With all that said, it just seems so wrong for the influencer to be practicing deception.

This trickery creates the illusion that morbidly obese people are fitter than they actually are. This illusion should NOT be cultivated.