Can a Recent Transient Ischemic Attack Be Detected on Exam? 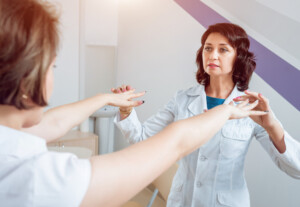 Is there a special test that can tell if you just had a transient ischemic attack?

A TIA (transient ischemic attack) is a mini stroke—and even though the symptoms may vanish after only 30 seconds, a TIA is a medical emergency because it shows that the patient is at very high risk for a massive stroke.

And in case you don’t already know, stroke is the leading cause of disability in the U.S. And it doesn’t just strike senior citizens.

Smoking and high blood pressure are key risk factors for a mini stroke or TIA. So are obesity and lack of exercise.

Out of these four risk factors for a transient ischemic attack, only one involves body weight. So don’t think you’re in the clear just because you’re thin.

Certainly, there exists a test that can tell if someone had a TIA, right?

Well, unfortunately, no such test exists.

“All of the tests that a patient with suspected transient ischemic attack will have ordered have two main goals: substantiate the diagnosis of brain ischemia and establish the cause of brain ischemia,” says Ivan Mikolaenko, MD, a board certified neurologist of 20+ years based in New York with subspecialty certification in neurocritical care.

Ischemia refers to interrupted oxygen supply due to impaired blood flow. In the case of a mini stroke, the cause would be a blood clot.

The clot may originate in the brain, or it may come from the carotid artery in the neck, which carries blood to the brain.

The clot can also originate in the heart. It travels up the aorta and into the carotid artery and to the brain where it lodges in a tiny vessel, obstructing oxygen to the area of the brain that the vessel feeds.

Clues to a Transient Ischemic Attack

In short, it may be many years before a single test can identify a TIA with 100 percent accuracy.