How an ER Doctor Diagnoses a Transient Ischemic Attack 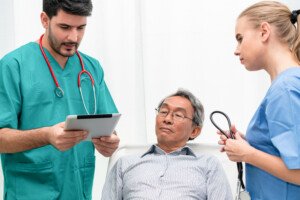 If you suspect you just had a transient ischemic attack (TIA), get to the ER stat (have someone drive you) so that a doctor can make a diagnosis.

It’s interesting to wonder just how a transient ischemic attack is diagnosed in the emergency room.

After all, when the TIA event is over, which may last less than a minute, the patient may have no symptoms to show for it by the time they get to the emergency room.

“A TIA is, by definition, a transient ischemic attack,” begins Rob Lapporte, MD, board certified in emergency medicine and chief medical officer of Physician 360, a telemedicine service.

How a TIA Is Diagnosed in the Emergency Room

Dr. Lapporte continues, “In an ER setting, in order to meet criteria, a patient would have to:

-Have stroke-like symptoms within the last 24 hours

-Have a CT scan that showed no evidence of bleed or infarct, and

-Have complete resolution of his/her symptoms prior to being released from the ER.”

The “bleed” that Dr. Lapporte mentions refers to bleeding in the brain.

A chronic subdural hematoma, which is a common type of bleeding in the brain among the elderly, produces symptoms that are clinically indistinguishable from that of a TIA, other than that they are persistent rather than transient.

A TIA Can Be Misdiagnosed As a Stroke

“Sometimes patients are diagnosed with a stroke from the ER, and the symptoms resolve within a few hours,” says Dr. Lapporte.

“At that point his/her diagnosis would be a TIA rather than a stroke because of the transient nature of the symptoms.”

Symptoms of a TIA (or stroke) include:

#1        Sudden one-sided weakness or paralysis, which can occur in the face

#2        Sudden-onset double vision, or a sensation that a shade is being pulled over one eye, obstructing vision

If these symptoms pass after only 30 seconds, this is just as emergent as if they were persisting for two hours.

GET TO THE ER for a proper diagnosis, whether it turns out to be a transient ischemic attack or some other condition.