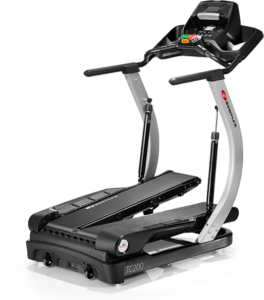 When the Treadclimber is compared to a high incline treadmill, it’s pretty difficult to determine which one actually works better — and then that depends on the user’s goals.

It also depends on how much the user likes the Treadclimber … or the treadmill.

I have spent plenty of time using the Treadclimber, and it’s tough to compare this with a high incline treadmill because both pieces of cardio equipment have their superb virtues.

However, let’s be fair and actually compare the Treadclimber with a standard treadmill.

The Treadclimber is relatively quiet. Whereas, some people slam their feet down so hard on a treadmill that the entire gym can hear it.
Also, sometimes the slamming noise is hard to avoid due to an inferior tread belt.

The Treadclimber is easier on the knees and back than the treadmill because the impact is soft, due to this cardio machine’s unique pedal design. Plus, it simulates, to some extent, snow shoeing and sand dune running.

The Treadclimber, despite being gentler on the joints, can yield a tremendous cardio workout – if you don’t cheat by holding onto this machine, that is.

The minute you hold on, you defeat the entire purpose and end up compromising much of the workout.

(The infomercials for the Treadclimber used to show the model holding on for the entire ad, but several years ago, did away with this and now alternate between a model holding on and a model pumping her arms.)

A treadmill, on the other hand, provides opportunity for joint impact if you run on the incline (though not as much as if you ran on a flat grade at the same speed), which isn’t always the terrible thing that it’s made out to be.

High impact cardio strengthens bones and joints, though it’s bad for people who already have problems with their knees and even back. 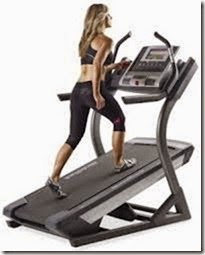 A treadmill is the cardio equipment that most closely simulates actual outdoor ambulation (running, jogging, brisk walking, hill climbing); it’s as close as possible to the real deal.

Running on a treadmill, more so than using a Treadclimber, will bring improvement to athletic performance.

For instance, if you want to improve your basketball conditioning, a treadmill is the far better choice.

If you want to go backwards, it’s easier to do this on a treadmill.

On the other hand, if you want to buff up your agility and neuromuscular coordination, moving backwards on a Treadclimber, without holding on, will really kick in some results.

For people with high levels of conditioning, a treadmill offers better options and more variety, especially since your gym might have a party pooper who tells you it’s against club policy to “run” on a Treadclimber!

I was running on this cardio machine one day (with a jogger’s arm pump) and the manager told me I can’t do this because it might damage the machine.

Despite what some people claim, it’s actually possible to “run” or jog on a Treadclimber. I had done this many times before the manager spotted me.

If you have a hamstring injury or something similar, that makes jogging painful, try running on a Treadclimber – you may find that this is painless, which was one of the reasons I was doing it; at the time I had a hamstring injury.

Both pieces of equipment offer great benefits for cardio conditioning for all levels of exercisers, including people rehabbing injuries.

For best results in your cardio training, use both the Treadclimber and the treadmill; no need to choose.