What Are All the Different Colors that Nail Melanoma Can Be ? 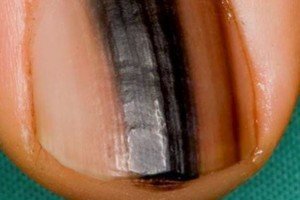 That line or stripe down a nail that’s melanoma isn’t always black or dark brown. It can be other colors, too, and it’s not always a stripe or line, either.

Nail melanoma is also called subungual melanoma, and technically, it’s a cancer UNDER the nail – on the nail bed itself – rather than arising from the dead cells that make up the actual nail.

The line, stripe or band is then seen through the fingernail. Nail melanoma, as it’s commonly called by laypeople, typically presents in some shade of brown.

It can also be what would be described as black or off-black. But other colors can be part of this cancer as well.

Dr. Patel continues, “Due to the depth of the pigment, it may also appear greyish or purple.

“It can include the proximal nail fold (also known as Hutchinson’s sign) and also appear as a small bump under the nail with no color.” 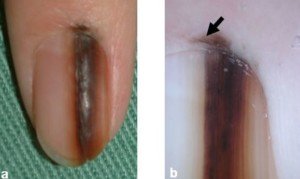 So we have shades of tan and brown, off-black and black, and also greyish and purple, as possible colors. And of course, no color as a bump under the nail.

Nail melanoma can also be composed of two or three distinct colors forming a band or thick stripe.

The lines, bands or stripes are vertical. However, subungual melanoma can also present in a smudge-like shape or a smear of sorts.

Subungual melanoma can pass as a benign line or streak under the fingernail.

Two Big Warning Signs You May Have Nail Melanoma

Pink Line or Stripe on Fingernail or Toenail Can Be Melanoma

Warning Signs a Nail Melanoma Was Misdiagnosed As Benign

Is Nail Melanoma Always a Stripe or Can It Be a Smudge?

Can Melanoma in a Nail Be Green?