Is Nail Melanoma Always a Stripe or Can It Be a Smudge? 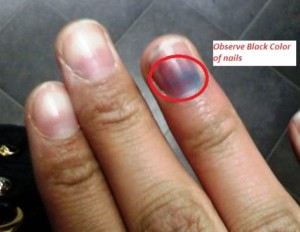 Did you know that nail melanoma doesn’t always present as a line, streak, stripe or band?

Nail melanoma can also appear as a smudge, smear or blotch.

Have you ever looked at that brown or dark smudgy area of your toenail or fingernail and thought, “It can’t be melanoma because it’s not a line”?

Think again. Though the blotch of brown pigment in your nail, from a statistical standpoint, is most likely benign – you should never rule out melanoma just because it’s not in the shape of a streak or line.

• Melanoma of the nail matrix is called subungual melanoma.

• When there’s blood there from trauma, it’s called a subungual hematoma.

• A benign mole or “birthmark” in the same area is called longitudinal melanonychia.

This, now, by definition, appears as a stripe, band or line that runs the length or near the length of the nail.

“The key to remember when it comes to subungual melanoma is that what you see is not the nail plate itself,” says Erum Ilyas, MD, a board certified dermatologist who performs adult and pediatric medical dermatology, cosmetic dermatology and skin cancer treatment at Montgomery Dermatology, LLC.

“The nail is somewhat translucent and a window to what the nail bed underneath looks like.

“To see any kind of spot that looks irregular should be evaluated like any other mole on our body.

“The same way a freckle or mole can become darker or irregular or become larger on the body — so can a melanoma under the nail plate.

“The reason we hear about streaks and bands is because moles in the nail matrix (the area under the cuticle that you cannot see) will ‘shed’ their melanin into the nail plate as the nail grows out.

“So the streak or band that you see reflects the nature of the mole or lesion in the nail matrix.

“If the band you see has clean edges and is stable, then the mole is likely a stable mole that is not changing over time.

“However, if the mole is changing or a melanoma, then the streak or band will get hazier and darker as more pigment is deposited into the nail plate as the mole changes.

“This would be an indication to have the base of the nail biopsied to determine the cause of the change in color.” 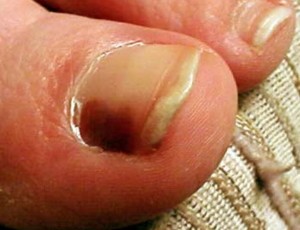 As mentioned, subungual melanoma is not always a line or streak. It can be a smudge. Why is this?

“There’s no rhyme or reason. The pigment will ‘smudge’ or take on different configurations than a dark streak simply getting a bit ‘fuzzier.’

“The idea though is that if the streak is just fuzzy, probably the melanoma is in an earlier stage or less aggressive. It is still maintaining a bit of order.

“Once it’s smudge like, it’s bound to have progressed or be more aggressive.”