A mother of a six year old wanted to know if an elongated mole in her child’s nail could possibly be melanoma.

How likely would this just be a harmless mark of pigmentation from birth?

“Melanoma of the nail is exceedingly rare in children,” says Kara Shah, MD, an adult and pediatric dermatologist and founder of Kenwood Dermatology in Cincinnati, OH.

“Therefore, in the vast majority of children, pigmentation of the nail (melanonychia) represents either a benign acquired or congenital nevus (mole), or a manifestation of a phenomenon called melanocytic hyperplasia — which results in deposition of brown pigment [melanin] within the growing nail plate and which therefore produces a brown streak in the affected nail.”

Do not let the term hyperplasia jolt you. The correct term for precancerous growth of cells is dysplasia.

A surplus of normal growth (normal cells rather than atypical) is not precancerous. Melanocytic hyperplasia is benign.

“As such, unless worrisome features are present (rapidly progressive increase in pigmentation in the affected nail or skin surrounding the nail or irregular streaks of pigment), melanonychia in children can be observed,” says Dr. Shah.

“You can be reassured that a brown streak or band in a child’s nail that has not changed in appearance over time is likely benign.” 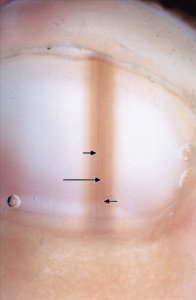 Benign longitudinal melanonychia in a child. Note the homogenous color and parallelism of the lines. Archives of Dermatology 2002;138(10)1327-133

Another sign of benign pigmentation is if another nail has a very similar streak or band.

Melanoma arising in two nails at the same time – even in the most vulnerable populations – blacks, Asians and Native Americans of older age – is virtually unheard of.

A malignant tumor that begins in the nail matrix – the part of the nail unit under the cuticle that form the nail plate – is known as a subungual melanoma.

The “mole” in the child’s nail may also be a splinter hemorrhage: old blood under the nail, which will gradually disappear as the nail grows out.

Other Signs Suspicious for Nail Melanoma

Not all nail unit melanomas have these features, but they are important to know.

A key feature of nail melanoma is a Hutchinson’s sign. Here, the pigment begins extending or spreading into the skin adjacent to the nail (sides, cuticle, fingertip). 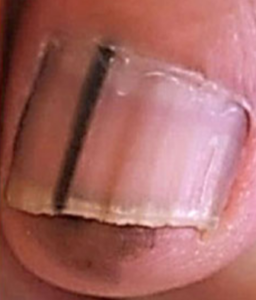 To the naked eye, this extension begins AFTER the development of the pigmented band, rather than at the same time or concurrently.

If benign pigment from a mole extends into the surrounding skin, it would be concurrent with the development of the mole.

And that happens. “Hutchinson’s sign is actually rather commonly seen in association with longitudinal melanonychia in children as a benign phenomenon and is not worrisome,” says Dr. Shah. In these cases it’s called pseudo-Hutchinson’s sign.

Remember, the VAST, VAST majority of brownish streaks, lines or bands in children’s nails are benign and will never turn into cancer.

This means ask your child’s dermatologist for how long you should be monitoring the melanonychia for suspicious changes before you can start backing off on the surveillance if the pigmentation has remained stable.

How rare is nail melanoma in a six year old, or ANY child?

“To our knowledge, the medical literature reports only 6 cases of subungual melanomas in children.”

“Nail melanoma in children is rarely reported in the literature, and all the published cases were diagnosed in dark‐skinned phototypes or in Asians. We report two cases of in situ nail matrix melanoma presenting as longitudinal melanonychia in fair‐skinned children of Italian origin.”

Is the top image a harmless elongated “mole” in the child’s nail? Or is it subungual melanoma?

It’s a benign deposition of melanin in an eight year old that began developing at around age seven. (CMAJ August 28, 2017)