Pink Line or Stripe on Fingernail or Toenail Can Be Melanoma 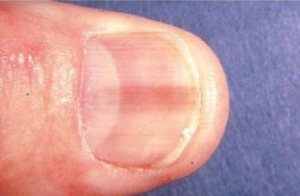 You probably already know that nail melanoma is often a dark line or stripe under the nail, but it can also be pink or a pinkish flesh color.

Because of this lighter color, such a melanoma is less obvious than the classic brown or black stripe.

It can be missed with a casual glance at the fingernail – and even more easily missed if it’s on a toenail.

“There’s a rare category of melanoma known as amelanotic melanoma,” says Bobby Buka, MD, a NYC dermatologist and CEO of The Dermatology Specialists, and author of “Buka’s Emergencies in Dermatology” and “Top 50 Dermatology Case Studies for Primary Care.”

Dr. Buka explains, “It’s a bit more intimidating than other types because it doesn’t have the same pigment association, instead requiring a biopsy for proper diagnosis.

“This generally means it’s diagnosed later than most, since it doesn’t immediately resemble something that demands treatment,” or that would alert the attention of a patient.

After all, a new brown or blackish band on a nail is easy to spot by accident.

But if the band or line is only a few shades off from the color of the nail – it can go unnoticed for quite some time, during which the tumor grows.

According to JAMA Dermatology (April 2010), the diagnosis of amelanotic melanoma of a nail when it’s at an early (highly curable) stage is EXTREMELY RARE.

This is because this type of tumor doesn’t stand out as far as contrasting color with the rest of the fingernail or toenail.

However, when left untreated, the nail and surrounding tissue will become increasingly visibly diseased.

“If a patient sees a red of pink line under the nail that’s rapidly changing or expanding, I would advise them to see their dermatologist at once,” says Dr. Buka.

Nail matrix cancer is known as subungual melanoma, and it occurs in all races.

Whether you have a history of excessive sun exposure or very little exposure, checking your nails every month should be part of your monthly skin exam.

Amelanotic melanoma can also arise on the skin and resemble a pimple due to its slight elevation, round shape and pink or flesh color.