What appears to be a big red pimple on a teen’s nose may actually be melanoma, the deadliest form of skin cancer.

“Melanoma is the second most common cancer seen in adolescents and young adults after lymphoma and the most lethal,” says Nita Patel, MD, Medical Director of Advance Dermatology and Laser Medical Center in Marina Del Rey, CA.

This eye-raising statistic comes from the journal Oncologist (2006).

In fact, the Journal of the American Academy of Dermatology (Nov. 2011) specifically states:

Invasive melanoma of the skin is the third most common cancer diagnosed among adolescents and young adults (aged 15-39 years) in the United States.

The reason melanoma drops to third place in this report is because people age 25 to 39 are brought into the equation.

But regardless of which statistic jumps out at you more, the fact remains the same: Teens DO get melanoma.

And this skin cancer can appear as a pinkish or “red” bump that resembles a pimple, and it can grow on the nose. 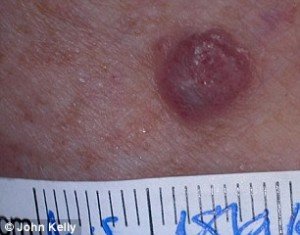 However, melanoma is nowhere near the most likely cause of this. Though this skin cancer is among the most prevalent malignancies in teenagers, it’s still exceedingly rare.

Truth is, teens very rarely are overcome with a life-threatening illness.

But among the diseases that rarely strike teenagers, there always will be those two or three that occur the most frequently – as in, relative to the other serious conditions that rarely affect them.

Other Possible Causes of “Pimple”
If a red bump on a teen’s nose looks like a pimple, this doesn’t always mean it’s a common blemish.

“There are many other conditions or structures this nodule can be — a vascular lesion such as a cherry angioma, a benign growth such as a fibrous papule of the nose, angiofibroma; other possibilities – sarcoidosis and a fixed drug eruption,” says Dr. Patel.

There is also a very tiny chance that something that appears as a big, or small, pimple on a teenager’s nose is another form of skin cancer called squamous cell carcinoma.

Bottom line: If something that looks like a pimple on your teen’s nose has not gone away after two weeks, have a dermatologist examine it with a handheld lens called a dermatoscope. Do not settle for a naked-eye exam. Get a second opinion if you don’t like how your gut feels.

This goes for any new spot, bump, patch or nodule on a teen’s face (forehead, cheek, chin, lip, etc.) that won’t go away. A common pimple should be gone within two weeks.