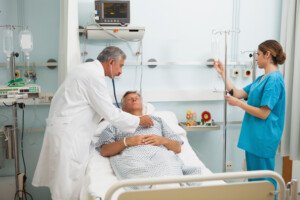 How can doctors tell that ejection fraction has worsened over the course of a few days in someone admitted with acute decompensated heart failure if only one echo was taken on the day of admission?

“He has worsening cardiac function” might show up on the medical report or be spoken to the patient or his or her family.

However, only one echocardiogram had been taken: in the emergency room.

An echocardiogram can show a lot of things about the heart, including problems with function, or features that suggest poor function.

When someone is in the ER with apparent symptoms of acute decompensated heart failure (and these can be many, including symptoms of acute renal or liver failure that are being driven by poor cardiac output), an echocardiogram will be administered.

The patient will be admitted, but repeat echocardiograms on each subsequent day will not be given (though blood tests will).

Yet doctors will know if the patient’s heart function is declining without having to measure the ejection fraction from day to day. 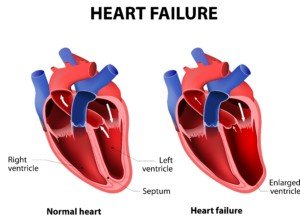 For example, a patient is in the ER with acute symptoms. The echocardiogram shows an ejection fraction of, say, 13 percent. That is really poor.

However, a few months ago, a routine echo may have revealed the same 13 percent ejection fraction – depending on who the sonographer was and which doctor evaluated the results.

Another doctor looking at the same results—either of the prior echocardiogram or the one in the emergency room—might see a 15 percent ejection fraction, or even 17 percent.

But an ejection fraction under 20 percent is so poor that, essentially, one of 17 percent is as bad as one of 13 percent.

But doctors will narrow that down to one number based on everything they see with the patient.

So if one doctor says 13 percent and another says 15 percent or even 17 percent, don’t assume that someone is inaccurate.

It’s all pretty much the same when we’re talking about such a low percentage range.

“Heart failure is more a clinical diagnosis than an echocardiographic one,” says Mark Pool, MD, a board-certified cardiothoracic surgeon based in TX who’s been in private practice since 2011.

Dr. Pool continues, “Meaning that a patient is in heart failure if the heart is failing to pump enough blood to the organs, regardless of how the echo looks. Heart failure might manifest as reduced ejection fraction on echo, but not always.”

If the patient’s kidneys are getting worse (as evidenced by a rising creatinine number), this is an indication that cardiac output is declining.

The kidneys are vascular organs that require 20 percent of the blood that the heart pumps out. They are highly sensitive to reduced blood flow to them (perfusion).

An abrupt reduction in blood flow won’t go unnoticed by the kidneys, especially if there’s been chronic renal insufficiency due to chronic heart failure.

It stands to reason that if renal function keeps getting worse by the day, that cardiac function is worsening.

But this doesn’t mean that a new echocardiogram would show a lower ejection fraction.

Another tip-off of worsening cardiac function is impaired mental status — which would presumably be from reduced blood flow to the brain, though severely injured kidneys can also cause this due to the kidneys’ impaired ability to filter toxins out of the body.