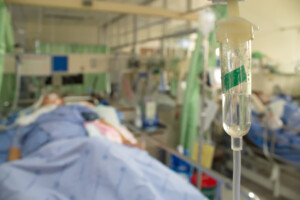 If someone with chronic heart failure goes into acute decompensated mode triggering cardiorenal syndrome and dies, is there a sooner point in time for which medical intervention could have saved this individual?

This depends. For example, suppose a person with chronic heart failure suffers an acute decompensation (worsening of symptoms over days).

The symptoms are respiratory distress and increased swelling in the lower extremities.

The respiratory distress is from pulmonary edema: fluid backup in the lungs due to worsening cardiac function.

If this fluid isn’t drained, of course the patient will die from respiratory distress.

If the fluid is drained early on in the acute process, the patient has a higher likelihood of surviving – for obvious reasons —

— Less fluid buildup by the time treatment is given means higher survival chance. If the patient stays home and lets the fluid accumulate, then by the time he’s taken to the hospital it’s too late to save him.

This is a different animal from pulmonary edema.

The solution to pulmonary edema is diuresis: drugs that will activate excretion of the excess fluid in the lungs (and legs).

The diuresis has the potential to damage the kidneys, but in some patients with acute decompensated heart failure, the amount of diuresis needed to mitigate the pulmonary edema is not enough to injure their kidneys to the point of contraindicating this treatment.

ADHF usually presents with the classic excess fluid in the lungs, causing increasing difficulty with breathing over a matter of days or even overnight. Coughing may be present, and its sputum may be blood tinged.

However, ADHF may also present with symptoms of acute kidney injury – and there may not even be any significant edema or pleural effusion (fluid buildup outside the lung).

Rather, the kidneys just one day start really getting worse, after years of having suffered from impaired blood flow due to a chronically weak heart.

The kidneys, in their rapidly worsening state, then cause the heart to get worse.

The heart, worse than ever, is pumping even LESS blood than ever to the kidneys, damaging the kidneys further. A vicious cycle ensues: cardiorenal syndrome.

The heart may have suddenly gotten worse first, but whether the egg came first or the chicken doesn’t matter with cardiorenal syndrome, as the medical management is the same: diuresis and possibly other drugs.

Another scenario is a sudden worsening of the liver. Like the kidneys, the liver has been subjected to chronic impeded blood flow, and can hold its head above water (compensate) for only so long before it just loses the battle: acute liver failure secondary to heart failure.

However, a very sick liver causes worsening kidney function. The portal vein in the liver becomes backed up, causing high blood pressure there. A chain reaction ensues, culminating in constriction of the blood vessels in the kidneys. 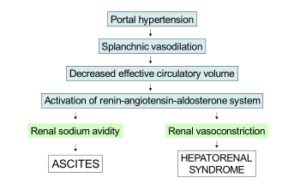 And all the while, the patient may actually be free of respiratory distress because there is no significant fluid buildup in or around the lungs.

The symptoms of kidney or liver failure, secondary to heart failure, may at first be subtle.

At some point soon after, symptoms will be pronounced enough to be impossible to take lightly.

Sometimes, such patients cannot be saved, especially if they are very old.

A fair question is if the survival rate of such patients would be higher if medical intervention is given at the very beginning of the organ failure (during which symptoms are present but seem benign such as suppressed appetite, feeling more fatigued than usual, sleeping more, etc.).

“I consider it very ‘dangerous’ psychologically-speaking, to speculate about what might have happened to a patient after the fact,” begins Mark Pool, MD, a board-certified cardiothoracic surgeon based in TX who’s been in private practice since 2011.

“It would be very much incorrect to assume that a patient could have been saved if treatment had been initiated earlier,” continues Dr. Pool.

“I guess my point is that yes, we doctors want to identify and treat ASAP, but you can’t assume after the fact that any particular intervention would have led to a specific outcome – there are too many variables involved.

“Some patients worsen despite what would be considered ‘perfect’ care and some patients survive despite mismanagement of their problems.

“Nonetheless, as a general rule, because older patients have a slimmer margin of error physiologically, it can be even more important to diagnose and treat heart failure and renal failure as soon as possible.”