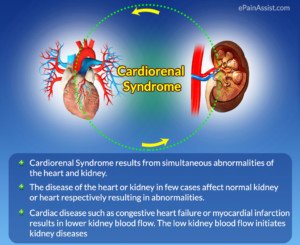 How do doctors know when to stop the diuretics in cardiorenal syndrome, if stopping these fluid-clearing drugs means life-threatening fluid buildup in the lungs and/or around the heart?

Cardiorenal Syndrome: As Vexing Today As It Was 40 Years Ago

A patient with acute decompensated heart failure typically presents with life-threatening fluid buildup in the lungs (pulmonary edema) and/or around the heart (pericardial effusion).

The fluid in the lungs causes serious respiratory distress which can be fatal.

The fluid around the heart, if left there, will worsen heart function, which can then lead to kidney or liver shutdown.

Diuretics such as Lasix will often clear the fluid, making breathing easier and sparing the heart from becoming worse.

However, an increase in diuretics has the potential to worsen kidney function, and there may come a point when doctors pull the diuretic to prevent acute kidney injury – to kidneys that may already have a pre-existing insufficiency from the patient’s chronic heart failure.

At first, all of this doesn’t seem to make sense. It’s as though the patient will die if there is no drug administration. The edema is not going to go away on its own.

But diuresis can be a huge problem when the kidneys are already in bad shape.

Diuretics stress out the kidneys by making them work harder to expel excess fluid from the body.

A family member might believe that continuing with Lasix will cause (in layman’s terms) “fatal renal failure.”

“That is not a phrase I have ever written in a patient’s chart,” begins Mark Pool, MD, a board-certified cardiothoracic surgeon based in TX who’s been in private practice since 2011.

“Renal failure can ultimately be fatal; don’t get me wrong, but it just isn’t usually described quite that way.

“I suppose part of the reason why, is that the function of the kidneys can be replaced with technological means – i.e., dialysis.”

But here again, the nephrologist (kidney specialist) may deem the patient unsuitable for dialysis.

Advanced elderly age, a very weak heart and a recent history of dangerously low blood pressure would be three contraindications to dialysis – which, in such a case, would cause serious damage to the kidneys.

But what if the patient is considered suitable enough for dialysis?

“So, usually, renal failure in isolation doesn’t cause a patient’s death because the patient can be put on dialysis and they won’t die (right away),” says Dr. Pool.

Dialysis extends life, but is not a long-term solution for people with acute decompensated heart failure.

Dialysis is a bridge to a kidney transplant for patients who have intrinsic kidney disease (i.e., infection, cancer) and at least a decent heart and reliable blood pressure.

But if the patient is old, frail and has a very sick heart, a new, transplanted kidney would soon suffer, for the same reasons the original kidneys became damaged: reduced blood flow from a weak heart!

Thus, patients with ACHF do not receive kidney transplants. That would be like building a new car without a fuel tank.

“Also, I would be careful not to say that diuresis ‘kills’ the kidneys because although diuretics can worsen renal function, they do not usually cause a cessation of kidney function to the point of needing dialysis, but rather, a worsening of renal function beyond the baseline,” says Dr. Pool.

Diuretics May Help or Hurt in Cardiorenal Syndrome

“At the risk of beating a dead horse, it is the balance between the two that is difficult,” says Dr. Pool.

“The art of medicine is found in that space between helping the patient and harming the patient, because many of the medicines and surgeries we have available could do either, depending on the situation.

“So, a skilled physician makes careful observations – based on history, physical exam, labs, other tests – to determine if diuretics are likely to be helpful.

“But ONGOING observations are needed because it is possible the diuretics may be harmful.

“On a practical level, we would watch for elevation in the serum creatinine, which could be due to the diuretic.

“If the excess fluid/swelling is addressed and the patient is improving, then the decision is easy – the diuretic can be reduced because it already accomplished much of what was needed.

“I can’t recall the journal, but I remember an ICU attending referring to a study that showed that use of diuretics does not CAUSE renal failure, even if diuretics often cause an increase in creatinine.

“I don’t mean to seem to contradict myself; if the creatinine rises, most docs will decrease the dose or stop the diuretic or switch to another one.

“But sometimes it is continued, and as a matter of scientific study, diuretics do not appear to cause the kidneys to shut down.”

Also keep in mind that in the majority of acute decompensated heart failure cases, the symptoms are that of rapid-onset respiratory distress and weakness (caused by pulmonary edema).

You can see how diuresis can really help such patients. But in a smaller number of chronic heart failure patients—whether or not a sudden worsening of their heart has occurred—the liver or kidneys go into acute (sudden and rapid) failure.

There may not even be any fluid buildup in the lungs or heart in such a patient.

So in these cases, you can see how diuretics would not be very useful: