Why Do Some Autistic People Smell Their Fingers? 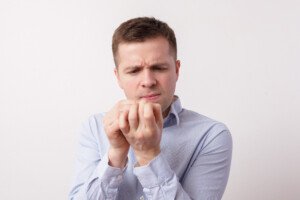 Autistic people who sniff their fingers or fingertips will usually make sure nobody’s around to witness this. They know it’s not a “normal” behavior.

It’s one thing to smell a finger after you just had it in something stinky. You want to see if the stinky substance got on your finger. If you detect the odor, you then wash your hands.

But some autistic people smell their fingers for a different reason – even though there may be times that they’ll take a sniff to see if a malodorous substance got on them.

When autistic people smell their fingers, fingertips or some other part of their hands such as their knuckles, this is called “stimming.”

When I began my autism diagnosis journey, I also began realizing just how much I’d been stimming for years.

It was so much a part of me, so natural to do, and almost always starting up on a subconscious level, that I never thought much of it while doing it at home.

However, I automatically suppressed most of it in public, limiting public stims to foot bobbing, subtle leg swaying or shaking, and “small” stims involving finger movements that nobody noticed.

As I began realizing how much I’d been stimming for years, I also realized that I had a tendency to sniff at my fingers and fingertips every so often at my computer.

It’s not among my more common stims, however. But it definitely belongs on my list of stims.

A thread on stimming, in autismforums.com, reveals that finger or fingertip sniffing is definitely a thing in the autism community.

It’s not among the more commonly-named stims, but it pops up periodically in the posts.

Why do autistic people smell their fingers or hands?

“I do smell my hands,” says Victoria Jones, an educator and entrepreneur who was diagnosed with ASD at 30.

“They just smell very familiar (if that’s the right word), so smelling them makes me feel grounded and safe.

“I used to smell them nonstop in middle school, but I forced myself to stop after being called out about it by other kids. I only smell them every once in awhile now.”

I can’t tell you precisely why I take the periodic sniff. Perhaps it’s because my stimming behaviors while at the computer often involve finger activity at my mouth.

And while my fingers are near my nose, I then just might automatically smell them.

It’s not a big inhalation; it’s a normal inhalation, but deliberate. I don’t keep sniffing, though. One or two sniffs, and I’m done for a while.

The other finger activity I do at my mouth is varied. Sometimes my fingertips press to the area above my upper lip. My fingertips may make it to just below my nostrils.

Sometimes a fingertip enters my mouth, settling between my lips for awhile. No nail or skin nibbling, though; the tip simply rests there.

Sometimes I like the feel of my lower front teeth against the underside of a fingernail. I don’t bite, though. I just settle my teeth there. Weird, I know.

There are also times I settle my upper front teeth under a fingernail. I may suck a little on a fingertip. Odd, I know.

But we autistics LOVE our stims. They are so self-regulating and feel so natural to do.

Many neurotypicals (NTs) chain smoke while at a computer. Though everyone knows how dangerous smoking is to the lungs and heart, nobody considers it “weird” or “juvenile” to smoke.

NTs may also mindlessly munch on candy, chips or some other junk food while doing computer work.

This can cause weight gain and contribute to poor health, but nobody considers it “strange” or “odd.”

Interestingly, finger smelling is considered a lot weirder than nail biting, even though the former doesn’t result in an unsightly appearance.

Of course, there are autistic people who bite their nails (as do, of course, some NTs), and who also smoke and over-snack on junk food while doing computer work or watching TV.

But we need to keep this in perspective: It’s really noteworthy that many NTs would consider the act of smelling one’s fingers as weird or babyish, while considering actual detrimental behaviors (overeating bags of munchies, chewing on nails) as merely bad habits.