Autistic Aversion to Stickers and Other Sticky Labels 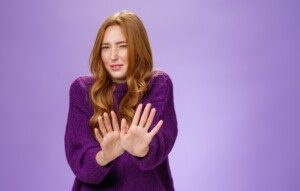 Are you autistic and hate stickers on things? Do you scrape off every sticker on any product you buy? Does the feel and even the appearance unsettle you?

Does the following describe you?

• The first thing you do when bringing home merchandise is remove the stickers.

• If the sticker doesn’t readily peel off, you scrape it off with a tool, namely an X-acto knife or box cutter.

• Even if it’s an easy peel, you can’t stand the idea of using your fingernail and instead use the knife.

• Stickers that don’t completely come off – those that leave behind the white residue of incompletely scraped-off paper – are either treated with a chemical or soaked in water for easy removal.

• Maybe you’ve even put dishwasher-safe items in the dishwasher to soak the “icky” paper remains for easy removal.

• You’re not satisfied with the removal until no more than just traces of the glue are visible; NO amount of the white paper of the sticker can be visible.

• You make sure not to make fingertip contact with the sticker.

• You can’t use the product until the sticker comes off.

• You experience internal distress upon discovering an unexpected sticker on an item you’ve been using for awhile.

• You avoid touching a non-removable sticker that’s on the handle of a broom, hammer or other such object.

• When your palm or fingers accidentally come in contact with a sticker, you’ll quickly pull it away.

You may even want to rub the area that made contact or rinse it under water.

• A fear of germs is NOT a part of this sensory issue.

• You can’t drink out of a new glass unless the price sticker on its bottom comes off.

• Even if there’s no potential for finger contact, you still must remove stickers, such as on the back of a large mirror, bottom of a flower pot, bottom of a waste can, etc.

Long before I began suspecting I was autistic, I had an intense aversion to stickers.

I don’t know when this sensory issue developed. It’s possible it was present in childhood, though I don’t recall any incidents with stickers.

It’s possible my mother removed stickers. The more likely theory is that during my childhood, manufacturers and retailers weren’t nearly as sticker-crazy as they are today or even in the past 20 years.

These days, EVERYTHING Is plastered with stickers and labels.

I’ve been on my own since age 22. Prior, I didn’t own a lot or buy a lot, because I’d been living with my parents.

When I was first on my own, I lived frugally, so there wasn’t much potential to encounter or notice stickers when shopping.

In fact, I do recall that stickers on fruit became a new thing at some point after I moved out West.

I thought it was weird that suddenly, the fruit in the produce section had stickers. Eeeuuww! Gross!

I peeled off the sticker of every peach, nectarine and plum before placing the fruit in a plastic bag.

This messed things up at the checkout. I missed the good ‘ol days when a bag of fruit was weighed to get the price. I then kept a sticker on one piece of fruit for scanning purposes.

Peeling them off eventually became too distressing, so I eventually resigned to keeping them on as I put the fruit in a bag.

However, I made sure that my fingers never made contact with the stickers. When I saw a sticker on an apple, I’d place my fingers strategically.

But then I discovered something awful: Occasionally a fruit had TWO stickers!

So though I was avoiding touching one, a fingertip was touching another out of my line of vision. This caused internal distress.

To combat this problem, I now carefully pick up fruit to avoid touching hidden second stickers.

At home I use a steak knife to slice out an area around the sticker to remove it. If the knife accidentally touches the sticker, I use a new knife.

NONE of my sticker or label aversion is related to germs. I actually don’t know why I have this sensory issue.

However, it also seems that manufacturers are more obsessed with putting stickers everywhere than they were when I was growing up.

During my autism diagnosis journey, I often wondered if sticker aversion was an autistic sensory issue.

I’d always known that it wasn’t normal to react to stickers this way. I simply had always thought that this was one of my weird quirks.

“Perhaps something, by having a sticker on it, is distracting from the perception of that object in the eyes of the autistic person,” says Dr. Jessica Myszak, licensed psychologist, and director of The Help and Healing Center, whose practice is mostly autism assessment for adults.

“Alternatively, it might be related to the visual details and visual clutter of stickers.

“Stickers are often haphazardly applied onto objects, and can be visually distracting.

“Autistic individuals are often very good at noticing visual details, and are more easily distracted by visual clutter, so an aversion to stickers may be related to these differences.

“Or it might be related to the texture of the sticker on the object itself — autistic people tend to prefer consistency and predictability — one bite of a meal that is unexpected is often enough to stop someone from eating any more.

“It’s possible that the feel of the sticker or the way that the appearance of the sticker changes the experience of whatever that object is, is enough that it is unsettling.”

No matter how much I try to intellectualize this autistic sensory issue, I can’t eradicate it. I refuse to try exposure therapy; that would sicken me.

It’s a problem I’ve learned to accommodate, even if that means spending 20 minutes scraping off stubborn stickers on the bottoms and insides of my four new houseplant pots.

Here’s a thread I started on wrongplanet.net.