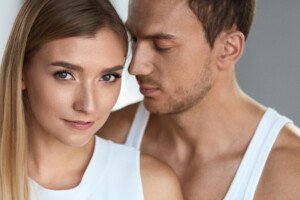 I’m a woman with clinically diagnosed autism; here are subtle signs your girlfriend could be autistic.

As a Level 1 Autist, my presentation of this neurotype is, for the most part, non-stereotypical when I’m around other people.

However, my presentation, as well as the presentation of many other autistic women, has all sorts of other features that could easily be detected by anyone who’s familiar with more subtle traits of ASD.

We don’t all flap our hands or stare at ceiling fans. Nevertheless, many signs of ASD can still be observable.

Signs Your Girlfriend Might Be on the Autism Spectrum

What many people don’t realize is that some autistics make too much eye contact or tend to have an intense gaze.

What’s really going on is that she’s not sure how to “do” eye contact and may be over-thinking it, trying too hard to “get it right.”

When it’s time to explain things, she often repeats the narrative beyond what would be considered sufficient for the listener to understand.

Neurotypical (NT) people may do this, but in autism, it’s far more noticeable.

She may give the excuse that people usually don’t understand shorter explanations, so she pre-emptively repeats the verbiage in the same dump.

Autistic women may become adept at this in an attempt to be better understood after years of feeling misunderstood.

Because the autistic mind is tuned so well to detail, this, too, can lead to over-explaining.

“I think that for some, this could be related to some social anxiety and some of the core differences with autism,” says Dr. Jessica Myszak, licensed psychologist, and director of The Help and Healing Center, whose practice is mostly autism assessment for adults.

“When they are speaking with a person, most people get a lot of nonverbal information back to clue them into whether the person is interested and whether they are understanding.

“However, this relies on interpreting another person’s minimal social cues while also talking about or explaining something, which is a pretty complicated process.

“If an autist is not picking up on these subtleties, they aren’t getting those ‘yeah, the person gets it’ vibes, so they may feel the need to ‘hammer in’ a point by repeating it.

“Anxiety further diminishes a person’s ability to accurately interpret a person’s limited social cues, so the over-explaining is really a product of a person’s difficulty reading subtle social cues while also engaging in a cognitive-heavy task.”

When talking, especially explaining something, she’ll pull in details that have no relevance. She’ll seem to go off on a tangent, but will return to the main topic.

This is called circumstantial speech – because it makes them feel that no stone went unturned when explaining something.

We autists want to make sure everything is precise and thorough. This reflects in our speech patterns.

If your girlfriend often brings little details up as she explains, that make you think, “What the devil does that have to do with anything?” this could indicate a neurodivergent mind.

When your girlfriend talks, especially an explanation, does she have a tendency to repeat the last line?

Though neurotypicals may do this, autists do it far more often – often enough to be noticeable. It may come across as a charming quirk (and I myself do it), but it’s a well-known trait of Autism Spectrum.

After making a statement, does she repeat its last few words – a few times? This is echolalia.

Can hear things others can’t

An NT with good hearing will hear things that others can’t, but this ability is more prevalent among autistics and may be exaggerated.

For instance, she may say she hears women nearby brushing their hair or hears conversations across the room as loudly as the one in front of herself.

This goes beyond flowers and scented candles. She sniffs her hands, skin, hair, plant leaves, food, the laundry detergent before every load, and, just in general, things that people normally don’t put their nose to.

Strange interests — and loves to talk about them.

Does your girlfriend suddenly want to talk on and on about her latest odd interest or one she’s had since childhood?

Or maybe she seems obsessed with a more popular topic?

Does she manage to work the topic into nearly every conversation she has with anybody?

Or perhaps she doesn’t talk much about her “obsession,” but is clearly preoccupied with it, such as houseplants.

She spends a ton of time on multiple FB accounts dedicated to houseplants. She also spends much time discussing plants in online forums. There are plants everywhere in her home.

She’s always transplanting one, polishing the leaves, snipping stems, growing new plants from clippings, taking pictures of them, talks to them.

• Expresses a lot of dis-ease about visitors sitting in her furniture.

“This could be a sign of that person being hypersensitive to sensory sensations, which can be a component of autism,” says Dr. Myszak.

“Many of the autistic teenagers I’ve worked with have shared how much they hate when other people enter their room, and especially, sit on their bed.

“I think that having a person in your space leaves little traces of that person behind, such as their scent on the chair. In a way, they are letting someone into their safe space, and they want that person to make a minimal impact.”

• Wears rings for the purpose of fiddling with them.

• Wears earplugs when in restaurants, large stores, around young kids, near someone who’s using a whistle or a vacuum cleaner, etc.

• Must read emails, that she intends on sending, several times before sending.

• Can spend an hour listening to the same four-minute song over and over.

• Talks to preschool kids with an adult voice.

• Has little interest in sex.

• Refuses to interact with or hold babies.

• Eats the food on her plate one type at a time.

• Can’t stand when different foods on her plate touch each other.

• Refuses to wear clothes with tags.

• Wears the same clothes all the time; puts heavy emphasis on comfort over fashion.

• Eats the same things every day.

• Doesn’t like being spontaneous. Insists on plans and predictable routines. Unexpected changes in plans leave her edgy, upset or argumentative.

• Seems drained or tired after social events or parties. Has made comments like, “Being around people taxes me.”

• Often tries to get out of social events.

• Has no actual friends. She may cite reasons such as, “People are boring.”

• Struggles with small-talk and either abruptly ends it or changes the topic to one of her odd interests or some other topic that’s not quite fitting for the context.

• Is superb at talking on and on about her interests or in a business related interaction, but struggles with more common, humanizing conversation.

• Says “bright” lights bother her when nobody else is bothered.

• Says a show was really funny but you never saw her smile during it.

• Says the hum of the refrigerator keeps her up all night while you can barely, if at all, hear it.

If you’re simply wondering if your girlfriend is autistic, then there’s a good chance that she is.

The above signs are not complete as far as subtle signs of autism, nor are they to be regarded as diagnostic. They are only checkpoints to be used as guidance.

Also, no autistic woman (or man) presents with every single ASD trait.

For instance, some are perfectly okay in loud environments, while others loathe them. Some have super-strict morning rituals while others are more flexible.

If you really believe your girlfriend is autistic, focus on the strengths that Autism Spectrum Disorder brings to a relationship!