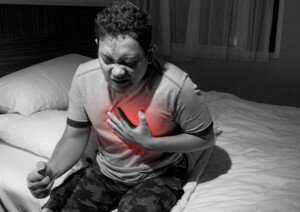 If you’ve accurately taken your pulse in the middle of the night to be 200 beats per minute or even 150, after being awakened by this furious heart rate, you should not just stew over this and keep trying to guess what happened.

Instead, you should make an appointment with a cardiologist. It’s possible that nothing is wrong even though your heart rate mysteriously soared to 200 beats per minute in the middle of your sleep.

“Heart racing in the middle of the sleep can be due to too much caffeine or adrenergic activity associated with nightmares during the REM (rapid-eye-movement) sleep — or, it can be due to cardiac arrhythmia,” says Andrea Natale, MD, cardiac electrophysiologist and executive medical director of the Texas Cardiac Arrhythmia Institute at St. David’s Medical Center.

Until you see a cardiologist, at least make some changes before bedtime. Avoid caffeine in the several hours before you go to sleep.

Also make sure you’re in a relaxed rather than hyped up state of mind.

What is adrenergic activity?

This is related to the release of adrenalin (the “fight or flight” hormone) during a particularly disturbing dream.

In that dream you may be under extreme duress, and this causes your heart rate to speed up to 200 beats per minute.

Young adults are more likely to have such a fast heart rate under these conditions than is a middle aged person, since younger hearts are just more capable of beating super fast.

What arrhythmia could speed a heart rate so high?

SVT (supraventricular tachycardia) results from an electrical disturbance causing the heartbeat to speed up – even well past 200 beats per minute in some cases.

However, it’s a steady beat. The rate is not all over the map, but a fixed (though extremely fast) rate while this episode is in progress.

Episodes may last minutes to hours. And yes, SVT can easily awaken you from sleep.

If this has only happened once to you – many months ago – this does not rule out SVT.

SVT is not to be ignored. Even if you’re young and healthy, SVT episodes over time can damage the heart.

However, if you already have severe heart disease, SVT can cause a heart attack.

Another heart rhythm disorder that can actually get the pulse up to 400 beats per minute is atrial fibrillation.

However, unlike SVT, the pulse in “A-fib” is not steady or fixed. It jumps all over the place in terms of rate.

If you were to view a heart rate monitor of someone undergoing an SVT episode, you might see a steady number of 200 or 170, 150, what have you.

It will fluctuate several beats either direction, but for the most part, it’s in the same range.

Stop pondering that overnight episode of 200 beats per minute and get your heart checked out once and for all. Just because it happened in the middle of your sleep doesn’t mean it can’t be a serious problem.