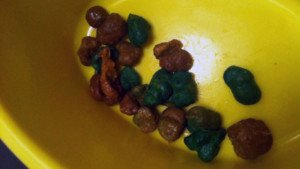 The color blue is not a classic warning sign in medicine, and this applies to stools, whether in young kids and babies or adults.

Blue usually is not a worrisome color to doctors.

“While there are a number of causes for blue stool in children, there is no known disease-related cause,” says Walter Gaman, MD, FABFM, board certified in family medicine and the author of several award-winning books including “Age to Perfection: How to Thrive to 100, Happy, Healthy, and Wise.”

Causes of Blue Poops in Babies, Toddlers or Preschoolers

• Ingestion of a blue crayon. Look closely at the poop and see if the blue portions appear to be undigested wax.

• Ingestion of blue playdough. Inspect the stools and see if the blue particles resemble clay.

• The most likely cause of blue bowel movements in this age group is consumption of something blue (e.g., frosting, ice cream, Kool-Aid) – but sometimes it’s not a food item.

• Many young children love blueberries and will sometimes void blue or blue-green stools.

A bowl of blueberries to a tiny body will have a greater impact in terms of natural pigments than on an adult size body.

If seeing blue in your baby’s or young child’s stools makes you nervous, despite now knowing what the causes are, then a good way to eliminate most of this is to stop feeding them foods with chemical dyes.

Keep giving them the blueberries, of course, but the body never benefits from chemical dyes. The closer food is to nature, the better it is for you.

Ask yourself if it’s really necessary to give a toddler or young child sugary frosting.

A child won’t demand what they haven’t already been exposed to. Stick with the blueberries and unsweetened yogurt for treats.

Causes of Blue Poops in Teens and Adults

• Fake blueberries – the “blueberries” found in muffin mixes and other processed foods that are actually granules of corn syrup, oil and food coloring.

• Raspberry cobbler, which if purchased from a store, very likely has artificial dyes.

• Blue velvet cake and any other food with enough fake colorings.

• Ingestion of ferric ferrocyanide, a treatment for heavy metal poisoning.

• Porphyria, an inherited metabolic disease that usually causes a purple hue to the BM’s, but there can be a bluish cast.

If you think you’re seeing dark blue bowel movements, make sure that the color isn’t actually black or a very dark maroon, as these two colors may mean bleeding in the GI tract.

Examine the stool matter under good lighting to better see the actual color.

Dr. Gaman is with Executive Medicine of Texas and is with the Staying Young Radio Show 2.0 podcast.

Can Dark Green Stools Be Caused by IBS?

Can Canned Beets Cause Red in Stools?