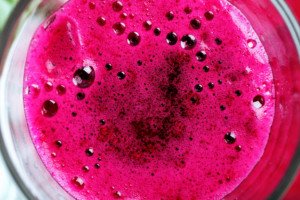 Can a woman tell the difference between stools that have beet juice mixed in them and poop that has menstrual blood mixed in?

I’ve got this down, having ingested my share of beets, and of course, being a menstruating woman.

I am no stranger to closely inspecting my stools; I don’t get grossed out cutting them apart with a spoon and getting up close.

I began doing this when I developed microscopic colitis, and since then, I have no problem doing this.

Menstrual blood can easily get mixed in with stools, especially soft poop or diarrhea.

Red stained cervical fluid can make contact with stools as both exit a woman’s bottom at the same time.

The result is red or pinkish/brown gobs of mucus on the poop that seem part of it.

Either way, it is a dark red with absolutely no hint of magenta or fuchsia, as is the case with beet juice.

Now note the fuschia color in the image above of the beet juice.

Since beet juice is pervasive and easily diffuses, it can find its way into cervical fluid that just might happen to drip out at the same time as a bowel movement.

Menstrual blood that’s mixed with stools will not easily stain a napkin or toilet tissue if you place the poop on the paper and break it apart.

However, beet juice will; it’s thin and instantly diffuses into the paper, staining it a magenta-red or fuchsia-red.

A woman may be far from her period, but upon seeing that tinged cervical fluid, might conclude there’s blood coming out of her vagina.

In reality, of course, the “blood” is beet juice that got mixed in with the cervical fluid.

Mucus also comes out with a bowel movement; this fluid helps with transit.

Beet juice doesn’t discriminate; it will find its way to intestinal mucus, so that you end up seeing tinged mucus with your stools.

Keep track of when you eat beets. Don’t be afraid to get familiar with what stools and mucus look like close up.

There are telltale differences between menstrual blood and beet juice.

NOTE: Whenever in doubt, consult with a physician.