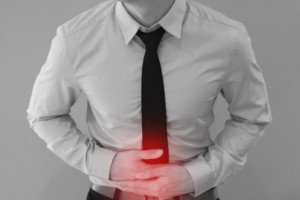 A doctor addresses the question of how do black stools from colon cancer compare to those caused by acid reflux.

I wanted to know if there were distinct differences in the appearance of black stools from acid reflux compared to those that can result from colon cancer.

“Black stools are not commonly seen with a problem in the lower gastrointestinal tract, as bleeding from the colon is more often bright red or maroon, assuming it is significant bleeding,” begins Michael Blume, MD, a gastroenterologist at MedStar Good Samaritan Hospital, Baltimore.

“Remember that colon cancers usually do not cause acute massive bleeding; they more often just ooze, so depending on the location, one may see some blood with a bowel movement or perhaps no visible blood at all.

“Blood is also a very good laxative, so a good way to determine if one is massively bleeding is to look at whether the stools are formed or loose, and how often they are occurring.

“Reflux disease in and of itself does not cause black stools, unless one is bleeding significantly from an ulceration related to severe reflux disease.

“If one is bleeding enough to cause black stools, one is usually having some significant bleeding.”