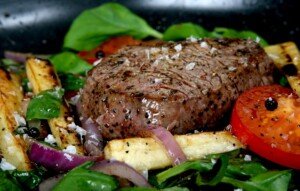 What’s going on with the studies linking meat and protein to higher rates of cancer?

One of the most startling reports to make rounds comes from Valter Longo, who was professor of biogerontology at the USC Davis School of Gerontology and director of the USC Longevity Institute at the time of his study.

His study, which appears in Cell Metabolism (March 4, 2014), concludes that high protein intake is linked to a dramatic rise in cancer death.

All-cause mortality was 74 percent higher among protein lovers during the study period than with lower protein eaters.

Though Longo et al’s study incorporates the issue of growth factor IGF-1, which is regulated by protein intake, the study did not adjust for a particular, and very significant, variable.

This “red meat cancer” study accounted for plant vs. animal protein — and adjusting for carbohydrate and fat intake did not alter mortality results.

Mortality rates and cancer death were not impacted by plant protein, even though plant protein also affects IGF-1.

This suggests that animal protein is the key villain.

But there’s a big gaping hole: source of animal protein!

What kind of animal protein were the study participants eating?

In fact, this question applies to all the meat and protein studies that deliver bad news – as in, “Red meat causes cancer.”

Can You Eat Your Lamb and Buffalo without Worrying About Cancer?

“The studies that have linked red meat to some cancers are very broad and have grouped red meat in the same category as processed meats including bacon, sausage, etc.,” says Dr. Keith Kantor, a leading nutritionist and CEO of the Nutritional Addiction Mitigation Eating and Drinking (NAMED) program, which treats substance abuse, mental illnesses and other illnesses.

“Red meat including pork, beef, lamb, etc., that is cooked from its most natural form are not as high of a risk for cancer as processed meats,” says Dr. Kantor.

“Factory farming methods are typically higher in chemicals and lower in nutrients, meaning that factory farmed meats have less essential amino acids than grass fed and organic farms do.

“In addition to the type of farming, the processing of the meats is also an important factor in determining the health risk associated with the meat.

“A frozen meal that has been pumped with preservatives, dyes and additional chemicals is not near as nutritionally dense as organic and all-natural meat options.”

Beware of these studies. “The meat is never adjusted for and never organically, grass fed sourced,” says John Salerno, MD, board certified family physician who combines complementary medicine with his private practice in NYC.

“In the studies, the meat used is never the healthier alternative, which is why these studies can be argued may not be applicable to those who choose to consume healthier, leaner meat options,” points out Dr. Salerno.

What would make a more truthful “meat causes cancer” study?

Let’s investigate people whose red meat consumption consists entirely of grass fed or wild game — straight from the butcher rather than from a box, tub or McBurger’s.

Where ARE these more focused studies?

for Complementary Medicine combines the wisdom of alternative healing with the teachings of traditional medicine, treating the entire patient instead of just symptoms.