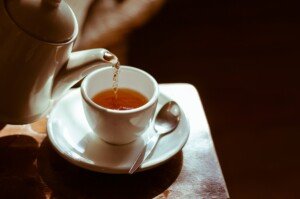 If you’re middle aged and keep worrying about getting Alzheimer’s one day, you should drink tea daily.

In particular, if one of your parents has or had Alzheimer’s disease, this reveals a genetic predisposition for which tea is especially useful for prevention.

Tea drinking daily can go a long way in helping prevent Alzheimer’s and other forms of dementia, says a study.

For those with a genetic risk (APOE e4 gene carriers), the risk reduction was estimated to be up to 86 percent.

What Kind of Tea Might Help Fight Off Alzheimer’s?

It doesn’t matter. It could be black tea, green or oolong. If you find tea unpalatable, one trick is to steep the tea bag in only half a cup.

The beverage will taste stronger, but at least there will be less of it to drink. And the key is to consume the beverage every day.

“The study is a comprehensive one and proves that the bioactive compounds in tea leaves, such as catechins, theaflavins, thearubigins and L-theanine, have anti-inflammatory and antioxidant potential,” says Dr. Keith Kantor, a leading nutritionist and CEO of the Nutritional Addiction Mitigation Eating and Drinking (NAMED) program, which treats substance abuse, mental illnesses and other illnesses.

“These bioactive properties may protect the brain from vascular damage and neurodegeneration.”

Tea vs. Drugs for Alzheimer’s Prevention

Professor Lei points out in the paper that drug trials have been “high quality,” but that “effective pharmacological therapy for neurocognitive disorders remains elusive,” and that “current prevention strategies are far from satisfactory.”

The full report is in the Dec. 2016 Journal of Nutrition, Health & Aging.