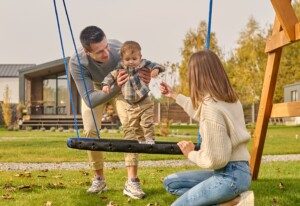 Isn’t it odd that rocking in autism is considered socially unacceptable, yet these same critics endorse rocking babies and toddlers in all sorts of ways.

Many autistic people rock. That can be taken two ways!

Before I go further, you need to realize that autistic people who are at the highest end of the Spectrum may still find rocking to be among their most preferred self-regulating behaviors.

It’s just that mildly autistic people, more so than those with more pronounced autism, are far more likely to suppress rocking in public.

What’s really intriguing is that it’s considered very “normal” and “socially acceptable” to rock a baby in a bassinet, plus also when in the parent’s arms while the parent is rocking in a chair.

So here’s the million-dollar question: Why is self-rocking considered strange or neurotic?

Why is it so socially unacceptable that some autists – who do it generously at home – can’t bring themselves to do it on the job, in restaurants, in waiting rooms or any other public venue?

We live in a really weird society in which the very behavior that’s denounced when adults do it, is strongly encouraged with babies and toddlers.

The very woman who wants her preschooler to ride on a rocking horse is the same woman who’ll stare at an adult rocking quietly at a table while waiting for their food order. 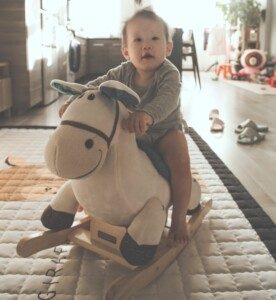 Neurotypicals are often difficult and unpredictable to figure out. Kids are told by their parents to stop rocking, even though those parents rocked them as babies or pushed at a crib that rocks to lull their baby to sleep. Let’s not forget about those rocking horses!

There’s even a famous and long-endearing nursery rhyme and lullaby about rocking: “Rock-a-Bye-Baby.”

Parents will also hold a baby while standing and rock or sway from side to side to comfort the child, and will even do this when the child already seems content.

But lo and behold, it’s a whole new ballgame when a person wants to rock their own body.

I’m autistic. I’m a rocker. Nothing dramatic, but something I won’t do in public, either.

I’ve been doing it for years in front of the TV and computer, while eating, even while finger-detangling my hair (a lengthy process). I’ve also found myself doing subtle rocking while listening to music.

Needless to say, I always refrained from doing it when at the workplace or anywhere else around people, even at the gym.

What’s the deal with rocking anyways?

When a person rocks, it’s associated with the concept of anxiety, neurosis or nervousness. Who wants to be seen in that light?

I’m the first person to declare that what people think of you is none of your business, and that always worrying what others think of you is a hellish way to go through life.

However, this doesn’t mean I should be okay with those around me thinking I’m some kind of Nervous Nellie, either.

Thus, I have always remained rock-free on the job or elsewhere in public.

It’s always been rather instinctual for me to suppress this choice stim when around other people.

Nobody ever told me to, as far as I recall. It’s kind of like automatically knowing not to pick your nose or scratch your anus in public. It’s an unspoken rule: No rocking around other people.

But at home, suddenly I become aware I’ve been doing it for a while at the computer.

It’s self-regulating but can also be a response to anxiety or enthusiasm.

I don’t think, “Okay, let’s do a little rocking.” Instead, it starts up subconsciously.

Another reason I do it is because it feels so natural, an automatic add-on to being seated.

If you’re neurotypical, think of how you assume a certain position when you sit.

For example, you might automatically cross your legs or ankles. You might reflexively be leaned towards one side.

Maybe your hands will naturally settle in your lap, folded. It’s all part of completing the picture of a comfortable sit.

Well, for me, the rocking is part of that completion. Often, a sit is not in completion mode until I’ve added some rocking. I sometimes even do it (subtlety) when I type.

In short, rocking doesn’t always mean a particular state of mind such as feeling stressed or enthusiastic.

But I still can’t get over the irony: The very people who’d see rocking as a sign of neurosis or autism are the same people who’d think nothing of pushing that crib for a rock to benefit the baby.

But some of us don’t outgrow rocking.

Tense or anxiety-filled situations often bring it out. Even a neurotypical, who’s deathly afraid of the dentist, may take to some slight rocking while waiting in the dentist’s office.

Situations of exceptionally high anxiety can bring out mild body rocking in the neurotypical. You might even catch it in a father’s waiting room in a maternity ward.

But people with autism spectrum disorder (ASD) are far more apt to rock on a habitual basis, and this includes for no known reason other than … it just feels natural.

Sometimes, though, intense thoughts may bring it on. Eagerness or feeling good, too, can bring on some rocking.

Another way to think of autistic rocking is the way a smoker might light up a cigarette when a conditioned stimulus is present, such as sitting before the TV, computer or crossword puzzle.

Some sort of activity is the stimulus that brings forth a repetitive behavior — whether that repetition be “mindless” snacking on chips or pretzels, smoking, chewing gum or a little body rocking.

And there’s nothing wrong with rocking. It’s not a form of self-harm, for instance.

Are you wondering why I myself won’t rock in public? This is a fair question and I’ll happily elaborate.

As mentioned, I don’t want to be perceived as a Nervous Nellie. BUT – it goes beyond that, too.

Rocking is and has always been strongly associated with mental conditions.

How often have we seen adults or teens in movies and TV shows rocking — when the setting was a mental hospital or courtroom?

Have we ever seen a stereotypical autistic child character in a TV show who wasn’t rocking?

This association becomes very strong, thanks to media portrayals of autistic children.

Oddly, years before I began suspecting I was autistic, if I saw anyone rocking in public, I was never able to relate to it because I believed that my rocking was in a different league – because I kept it concealed from other people!

Therefore, I thought that anyone who did it in public had some kind of mental problem!

When that baby starts crying, getting cranky or fidgety, what’s the first thing people do? ROCK OR SWAY HIM.

And the rocking isn’t limited to the bassinet or rocking chair. There are portable swing-set gadgets that parents will set up in the kitchen or living room, then set their babies in to self-swing; the baby quickly learns they can generate a back and forth motion in their seat.

To self-regulate or self-soothe, neurotypicals will sit in a rocking chair and rock it while sipping tea or discussing something heavy on the phone.

The chair may be a single traditional rocker that fits only one person, or, it may be a hanging swing that fits two or three people.

But that same NT is likely to think something’s “wrong” with anyone who rocks without a chair or swing! The world is crazy!