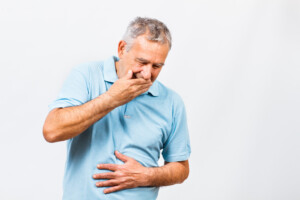 Is the cause of dark or black vomit necessarily cancer? Can there be not-so-dangerous causes?

Your vomitus absolutely should never be very dark, let alone what seems to be black.

A medium brown or a milk-chocolate color of vomitus doesn’t necessarily mean anything’s wrong, especially if the consistency or appearance is uniform throughout.

A combination of food containing tomato paste, plus bile (a greenish digestive liquid that’s formed in the liver and fills the intestines) can result in brown vomit if something triggers vomiting.

Red/orange combined with green results in brown. This happened to me: I ate two calzones that had been sitting under a heating light at a cafeteria for who knows how long.

At around 3 am the following morning I wakened with the urge to vomit.

Out came solid brown vomit. Immediately after I felt fine and never had any subsequent issues.

But if you haven’t consumed tomato paste within the past 24 hours, and can’t think of any reason you could’ve ingested food poisoning, and especially if you’ve been having other symptoms such as chest or stomach pain, intermittent nausea or appetite suppression – you need to alert your doctor.

This is not to be confused with the descriptor of “tarry black” that’s given to bowel movements.

“Tarry black” refers to not just the color of stools that have old blood, but the visible texture of the black components. It does appear like liquid tar.

But vomitus won’t have the appearance of liquid tar, even though the color might be described as black.

“Black tar is used to describe the stool characteristics of melena, the result of the digestive process on blood,” says Joseph Weiss, MD, a board certified gastroenterologist and clinical professor of medicine at the Medical School, University of California, San Diego.

“The internal bleeding that can present as melena, when it also triggers vomiting of partially digested blood, is described as ‘coffee grounds emesis.’

“The most common cause of ‘coffee ground emesis’ is a bleeding peptic ulcer.” 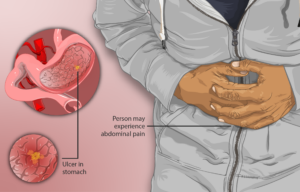 A peptic ulcer is tissue damage on the interior wall of the esophagus (the “food pipe”), stomach or small intestine.

This damage is caused by excessive contact with acid.

A peptic ulcer is not caused by cancer. Symptoms include chest pain or burning, a discomfort a few seconds after swallowing food, burping, bloating and intolerance to fatty foods.

You may think that a peptic ulcer is nothing to worry about since it’s not cancer.

But this is a very serious condition and requires immediate medical treatment (usually a prescribed course of a class of drugs called proton pump inhibitors, such as Nexium).

Furthermore, prolonged contact of the esophagus’s interior with refluxed acid (gastroesophageal reflux disease or GERD) can lead to a precancerous condition called Barrett’s esophagus in about 10% of cases—even if you never had a peptic ulcer.

This condition transforms into esophageal cancer in one to two percent of cases.

“Any source of blood that enters the stomach will appear the same if partially digested,” continues Dr. Weiss. “The source could be nosebleed, from the lungs, gastritis or even drinking animal blood.”

And of course, stomach, intestinal and colon cancer can also cause “black” in one’s vomitus.

Dark or black vomit should definitely be brought to the attention of your doctor.

Dr. Weiss is the author of Got Guts! A Guide to Prevent and Beat Colon Cancer. He has also presented numerous presentations on various health topics.