How Does Esophageal Cancer Eventually Kill a Person? 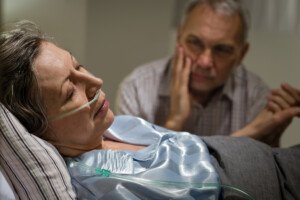 The 5-year survival rate for esophageal cancer is alarmingly low.

It’s essentially a death sentence. Just HOW does esophageal cancer cause death?

The 10-year survival rate of this cruel disease is virtually zero, says Alex Little, MD, a thoracic surgeon with a special interest in esophageal and lung cancer, and clinical professor at the University of Arizona.

There is a YouTube video of a woman, 34, describing her esophageal cancer symptoms. She looks healthy.

But five months after the video was made, she died from this disease.

A month before she passed from esophageal cancer, she made another video from a hospital bed.

Her skin was rather ashen, and her face looked older and sunken. She had been hospitalized for gastric distress and fluid buildup in her abdomen.

And about a month later, she was dead.

Death has terrified mankind since the beginning of time.

We’ve always wondered just how it “feels” to die.

Many often wonder exactly what happens in the body that makes it die.

When someone gets shot in the heart or drowns, this is easy to understand.

But death from esophageal or other cancers is not a quick, shot-in-the-heart type of dying.

Death by Esophageal Cancer: What Happens

Esophageal cancer eventually spreads, and this leads to death – which follows a progressing deterioration which eventually quickens – but exactly how?

“This is rarely the case now, as patients can eat because of an operation, a stent or because chemotherapy and/or radiation have shrunk the tumor.

“Now, it is the effect of metastatic disease shutting down other organs such as the liver and brain by direct involvement and also diverting essential nutrition to feeding the metastases.”

When the liver fails, the kidneys follow suit, because the kidneys depend on a healthy liver.

As the liver shuts down in end stage disease, this causes a chain reaction that results in constriction of the kidneys’ blood vessels, stripping the kidneys of their life-giving blood supply. The patient is now in acute kidney failure.

Kidney dialysis won’t save the patient because the liver would continue to be in end stage due to cancer metastases.

It’s also possible for the spread to be in the kidneys as well.

The brainstem controls vital bodily functions, so if there is cancer invasion of the brainstem, it’s easy to understand how this plays a role in terminal illness.

If the patient is receiving nutrition through a tube, much of that nutrition is going to the greedy metastases, fueling their systemic invasion, creating a vicious cycle that eventually culminates in multi-organ shutdown.

Ultimately, a last, and weak, breath is drawn.

Here is the link to the video in which a young woman describes her esophageal cancer symptoms.